Listen: Carmen Giannattasio on Maria Stuarda - 'I feel like an actress who sings'

The Italian soprano tells BBC Radio 3 about how she approaches opera's twin demands of singing and acting, and the challenges of wearing a two-stone costume. 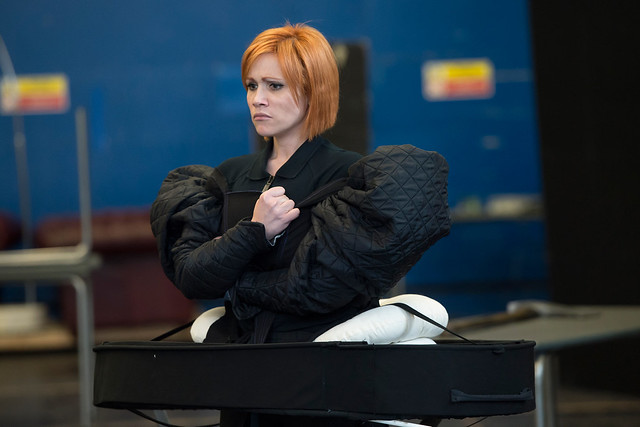 'I feel like an actress who sings,' Carmen told presenter Suzy Klein when asked how she views opera's twin demands of singing and acting. 'It was different in the past when singers just stood and sang their music beautifully, but nowadays we're more in the action. Opera was created [to unite music and theatre]: Monteverdi said opera was 'Recitar cantando', which means acting while singing - first acting, then singing.'

It's an approach which she shares with the production's directors, Patrice Caurier and Moshe Leiser, whom she's relishing working with:

'It's bombastic! They're very demanding but I've learned so much from them. You have to think about so many things when you perform. [When working on the dramatic aspects] Moshe suggested I be inspired by the music and he was totally right. If you give the right accent on the word and the music, half of the work is already done.'

Her commitment to throwing herself into a role doesn't stop with changing her hairstyle to match that of her character (prior to taking up the role of Elizabeth I, she cut her hair short and dyed it a fiery red to match that of the iconic Tudor monarch). She also has to contend with an extremely weighty costume:

'I asked for the costume from the first day because you must carry on [and get used to it]. It's more than two stone in weight. It's not easy to sit, move, or to run in, wearing very high heels. I also have a bald cap and a wig on, plus a crown. It's a lot!'

Despite Maria Stuarda only being Carmen's second run of performances at Covent Garden, she says she feels at home in London: 'It's my second home and one of my favourite theatres in the world. I've sung just once at the ROH before - in La bohème - and when I came back, from the porter to the General Manager they welcomed me back saying "Carmen! It's a pleasure to have you here!". It's like a family. Our job is very difficult but when [you're treated] like this, it's the best that an artist can receive.'

Maria Stuarda is a co-production with Polish National Opera, Théâtre des Champs-Elysées, Paris, and Gran Teatre del Liceu, Barcelona, and is given with generous philanthropic support from Lord and Lady Laidlaw, Susan and John Singer and Michael Hartnall.