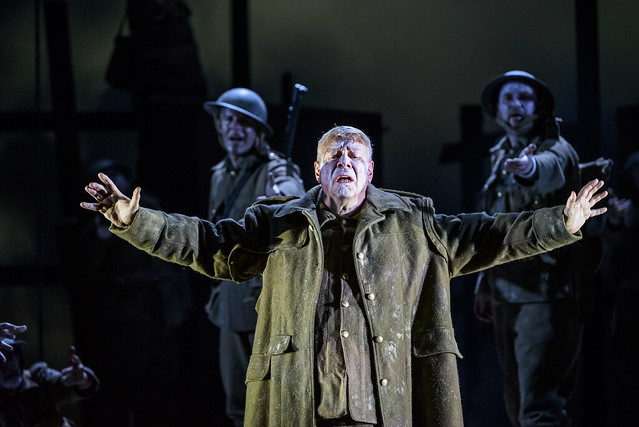 On 1 July 1916, British and French forces commenced an offensive against the German Empire by the River Somme, a battle which would go down in history as one of the bloodiest conflicts of the First World War. As a member of the Royal Welch Fusiliers, poet David Jones experienced first-hand the horrors of the Battle of Somme and used this as inspiration for his poem In Parenthesis.

Widely considered the greatest English work of literature on war, In Parenthesis combines lyrical verse, prose, military slang and literary references, which include Shakespeare, Malory, Milton and even Lewis Carroll.

Central to the epic war poem tradition is the 'warrior’s boast' and in Part 4 of In Parenthesis the immortal soldier Dai Greatcoat delivers his. He claims to have been present at some of the most significant conflicts in Western history and myth, from Cain’s murder of Abel, to the Trojan War, to King Arthur’s Battle of Badon Hill, as well as legendary Welsh victories and defeats. Greatcoat is the archetypal warrior who is not just experiencing the current battle but also all those that have come before.

The opera captures the terror, humour and other-worldliness of Jones’ poem, maintaining the texture of his writing through use of ancient languages and traditional Welsh song. Greatcoat concludes his boast with – ‘You ought to ask, why? What is this? What’s the meaning of this?’ – questions that the opera also seeks to answer.

In Parenthesis will be performed at the Royal Opera House on 29 June and 1 July 2016. Tickets are still available.

Commissioned by the Nicholas John Trust
With 14-18 NOW, WWI Centenary Art Commissions, supported by the National Lottery through Arts Council England and the Heritage Lottery Fund, and by the Department for Culture Media and Sport.