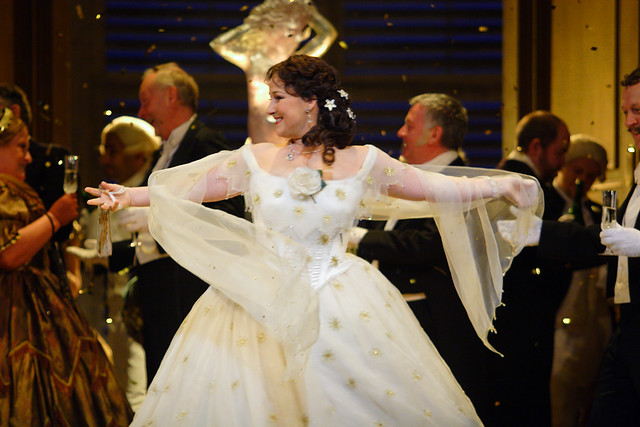 Most numbers in opera that talk about action describe something that has already been done, or that is about to be done. But a few operas (usually comic) and particularly operettas include songs that describe an activity while it is being undertaken – giving their composers the perfect opportunity to express a particular action through witty and often highly inventive means. Chabrier was something of an expert in the genre, and included a fair few action songs in L’Étoile.

First comes a Tickling Trio. Princess Laoula and Aloès (the wife of the Princess’s father’s emissary) come across a sleeping young man, Lazuli, they decide to tickle him to wake him up. It is in fact not the main melody but the orchestra that portrays the tickling most clearly. The music in an instrumental section, which spreads into the ensuing orchestral accompaniment to the singing, has high, short trills and little scales which mimic in sound the light and quick motion of tickling – and its giggling results.

Next comes kissing. In The Mikado, Gilbert and Sullivan’s satire set in Japan, Yum-Yum and Nanki-Poo are forbidden from expressing their love for each other. So what can the lovers do? Well, in one duet they demonstrate with each other precisely what it is they must not do – purely so as to make sure there is no misunderstanding. Spaces in the music are left for quick kisses between the words: ‘This, oh, this [kiss], oh, this [kiss], oh, this [kiss], This is what I'll never do!’ They couldn't make it clearer to each other. Of course L’Étoile goes not one, but two better: in charming waltz form, it has a kissing quartet in which the kisses of Lazuli revive Laoula from her faints.

Laughing has been built into music by several composers. Verdi use it with dramatic irony and menace in his Laughing Chorus ‘Va, se di notte’ in Un ballo in maschera. But the infectious exuberance of laughter gets more of an outing in the famous Laughing Song ‘Mein Herr Marquis’ by Johann Strauss II in his operetta Die Fledermaus. The maid Adele is pretending at a ball to be a glamorous actress. Eisenstein, her master, is understandably confused when he meets her and mentions the resemblance to his maid. Adele keeps up her act and dismisses such a ludicrous thought with laughter. The repeating tones of a laughing ‘Ha, ha, ha!’ are built into the music as the conclusion to the lines of the chorus, developing with even more repeats, then finishing with some coloratura trills and scales that suggest increasing merriment.

The action song found most regularly on the operatic stage is one for drinking. Often these come in the forms of toasts, such as the Brindisi in Act I of La traviata, or as more rustic chorus drinking numbers, such as that led by Turridu in Cavalleria rusticana. In L’Étoile, the alcoholic intoxicant of choice is green chartreuse. There is a whole song devoted to consuming it, sung in the third act by King Ouf and his astrologer Siroco, who in maudlin mood console themselves with drink.

But the state of La Périchole in Offenbach’s operetta of the same name goes further. In ‘Ah! quel dîner, je viens de faire’, La Périchole confides that she has drunk way too much and concedes she is a bit tipsy – ‘un peu grise’. The music makes it very clear that she is under the influence through the short phrases of the verse, the hesitations in the timing, repetitions of phrases and in a main slow waltz melody that has a strong sense of warm deflation. But ‘shhh’, don’t tell anyone! she adds. Not that they need telling – the words, music and action make it all too clear.