Les Troyens to be streamed and broadcast on 5 July

David McVicar's production to be streamed online in UK and broadcast on TV to mainland Europe. 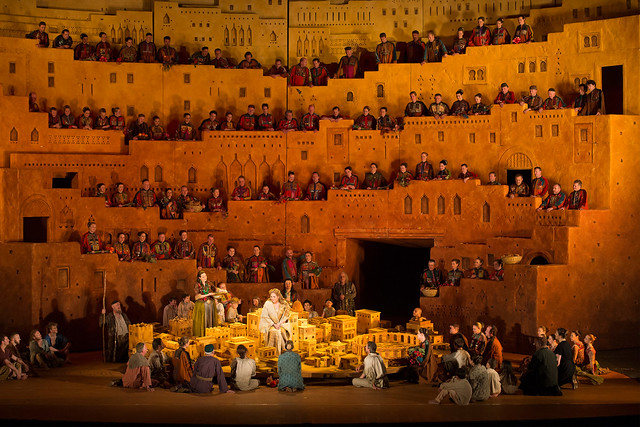 David McVicar's acclaimed Royal Opera production of Les Troyens is to be streamed and broadcast live to the UK and Europe on 5 July, starting at 5pm (GMT).

The performance will be streamed online to UK viewers via The Space and broadcast via TV channel Mezzo to across mainland Europe, allowing audiences internationally the chance to see one of the most anticipated events of the London 2012 Festival. The performance will also be available around the world on demand on The Space from Monday 9 July until the end of October, and shown internationally on the big screen in November as part of the 2012/13 Cinema season.

Hector Berlioz's opera is an adaptation of Virgil's Aeneid. It tells the story of the fall of Troy and the subsequent travels of Aeneas (Énée) to Carthage. The staging - transposed to the 1800s - matches the work's epic scope, with Es Devlin's designs featuring an impressive fire-breathing Trojan horse, fashioned from the machinery of war. Bryan Hymel and Eva-Maria Westbroek star.

Les Troyens is sold out aside from returns, but for those who would like to feel for themselves the heat from the Trojan horse, 67 day tickets are available on the day of each performance. These can be bought from the Box Office from 10am.

This article has 25 comments

Leave a reply to Miriam · Cancel