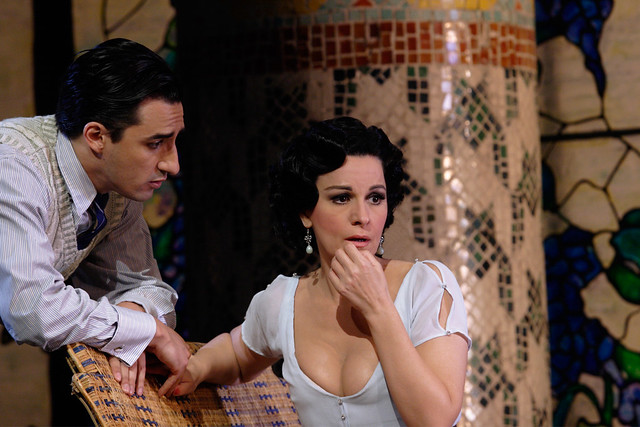 The Royal Opera's La rondine will be screened live, for free, to BP Big Screens around the UK tomorrow (Thursday 11 July).

The annual BP Big Screen events attract thousands, many of whom bring picnics to enjoy while they soak up the unique atmosphere.

La rondine tells the story of elegant courtesan Magda who meets the young and innocent Ruggero. She's smitten and dreams of building a life with him. Her chequered past however, is difficult to escape.

Of Puccini’s composition, Charles Castronovo (Ruggero) says: ‘He has this ability to create a melody that sticks with us immediately. Puccini really thinks about the voice…it’s very satisfying to sing’.

Angela Gheorghiu, who will sing the role of Magda during the relay, says that the role is one of the most difficult she has sung. 'Your voice needs to be very clean and very soft from the first note to the last,' she says.

Watch Angela speaking about preparing to sing in La rondine.

Tell us what you think

On the day of performance, we’ll be giving an exclusive look into preparations through our social media activity so be sure to follow us on Twitter and like us on Facebook before the big day. We’ll be using the hashtag #BPbigscreens so tweet us your thoughts, as well as a picture of your picnic to be in for a chance of winning a picnic hamper.

Read audience thoughts about the production, and add your own.

La rondine is sponsored by Coutts. Generous philanthropic support was given by Mr and Mrs Christopher W.T. Johnston and The American Friends of Covent Garden.