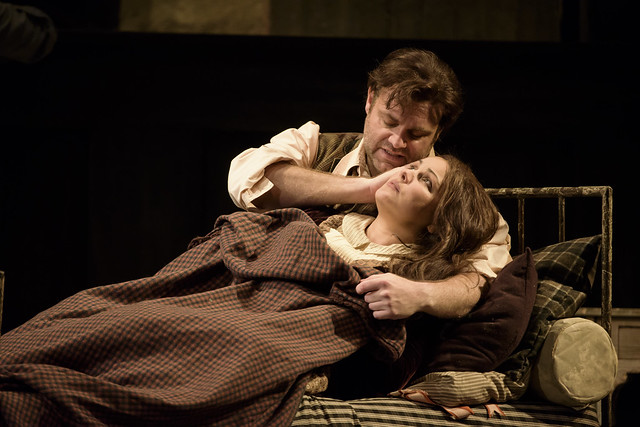 John Copley's classic Royal Opera production of La bohème will be relayed live to cinemas around the world and BP Big Screens in the UK at 7pm BST on 10 June 2015.

When Rodolfo, a penniless poet, meets Mimì, a seamstress, they fall passionately in love. But their happiness is threatened when Rodolfo learns that Mimì is gravely ill.

One of a number of operas inspired by the city of Paris, La bohème based on the novel Scènes de la vie de bohème by the poet Henry Murgher. Murgher's work was semi-autobiographical, featuring characters based on the friends he made while living as a desperately poor writer in a Paris attic.

Find out more in our Opera Essentials article

John Copley's now iconic Royal Opera production had its premiere 41 years ago in 1974. Featuring meticulously detailed designs by Julia Trevelyan Oman, it became an audience favourite, lasting considerably longer than the four or five Seasons it was originally intended to!

Copley's production incorporates a wide variety of props, ranging from a billiard table for the café scene to a toy-seller’s cart laden with wares, in order to create an engrossing and believable world. Read our How to Stage an Opera article taking a closer look at the complexity of La bohème's staging.

The production has starred many of the opera greats over the past four decades, including Plácido Domingo, Kiri Te Kanawa and Luciano Pavarotti. View our gallery of archive La bohème production shots.

La bohème features some of Puccini's most memorable music, including romantic duets such as 'O soave fanciulla' and a heart-breaking finale. Renowned conductor Nicola Luisotti has said that 'you can learn more from one of Puccini's scores than from books'.

The opera is one of a number of examples of the composer's knack for using music to evoke a wide range of settings.

The production returned on 18 May. Read audience reactions to the opening night and add your own review. After the relay, we will publish a roundup of the audience tweets, so share your thoughts with the hashtag #ROHboheme.

BP Big Screen audiences will have the opportunity to win a luxury picnic hamper by sharing their Summer Selfies from venues around the UK. Details of how to enter will be shared on the day of the relay.