Just the ticket! The surprising history of ticketing at the Royal Opera House

As the Royal Opera House ushers in the newest innovation in ticketing, ROH Collections looks back to the earliest theatre tickets used at Covent Garden. 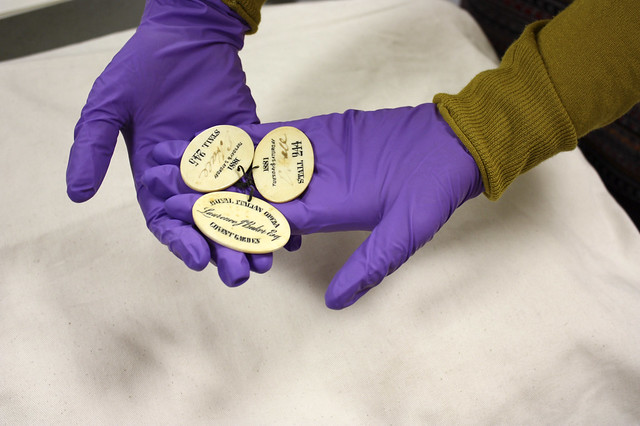 Modern theatre goers are used to the idea of buying a paper ticket for a numbered seat in a specific part of the theatre on a specific night. However, it was a completely different experience in the early years of the Theatre Royal, Covent Garden, the first theatre on our site. Audiences would simply pay on the door for admission to the theatre – with no guarantee of a seat.

A few years later things began to change, both at the Theatre Royal and in theatres around London. Theatre managers began to issue pre-paid tickets or 'checks' for performances, enabling them to control more successfully the numbers of people in the theatre and, as importantly, to know how much money they were making each evening.

Checks or tokens were usually purchased on the door of the theatre, and then handed over on entering the relevant part of the auditorium. Tokens for some London theatres could also be bought at coffee houses or inns in the surrounding area. Later they were purchased from 'box offices' situated close to the doors of the theatre.

These early theatre tickets were circular metal tokens usually made of brass or bronze. About the size of coin, they were stamped or engraved with the name of the theatre and the area the holder was permitted to enter. We know that brass tokens were in use at Covent Garden from as early as 1755, only 23 years after the first theatre opened.

Sadly, we don’t have an original example of one of these early tokens in the ROH Collections, but we do have illustrations of originals. This shows the first tokens had a portrait of George II with the name of the theatre on one side, and the area of the theatre and year on the reverse. An original token survives today in the collections of the V&A Museum.

By 1762 the design of the tokens had changed. Four of these metal tokens are the earliest original theatre tickets we have in ROH Collections. Unlike their predecessor, these tokens only include the name of the theatre and the area, with one side left completely blank. Two of those in our collection have been cut down to a smaller size, and another is heavily worn – but further 1822 illustrations show the detail of the original design.

Opera in the 19th century was often supported by subscription schemes. Audience members could buy subscribers' tickets, which reserved them particular seats on a set day or days of each week, throughout the opera season. At that time the season was usually only eight to ten weeks long, and it seems that only selected areas of the theatre could be reserved.

To meet this need a new style of reusable tokens was introduced. Tokens made of bone, either circular or oval in shape, were issued by the theatre from at least the 1860s. One side showed the name of the theatre (at that time the ROH was known as the Royal Italian Opera) and the name of the subscriber, while the other showed the year, the evenings subscribed to and the seat number. Each token was signed by the Box Office Manager – a Mr Edward Hall from the 1860s to the 1880s.

The exact purpose of the hole bored through the top of these reusable tickets is unclear. Perhaps it was intended to allow the token to be threaded onto a cord or ribbon for safe-keeping, or attached to the lapel of the subscriber to make it visible to theatre staff at each performance.

Although metal and bone tokens of various shapes and designs were the most common form of theatre tickets well into the 19th century, paper tickets were also used. These developed into the paper ticket with a perforated counterfoil or ‘stub’ that modern theatre goers are familiar with – and which today is sharing space with the e-ticket.

Read more about the developments in e-ticketing at the Royal Opera House.

This article has been categorised Off stage and tagged check, e-tickets, Item of the Month, ROH Collections, tickets, token, V&A Museum