Xavier Montsalvatge’s fantastical fairytale based on Puss-in-Boots will get its premiere in Linbury Studio Theatre. 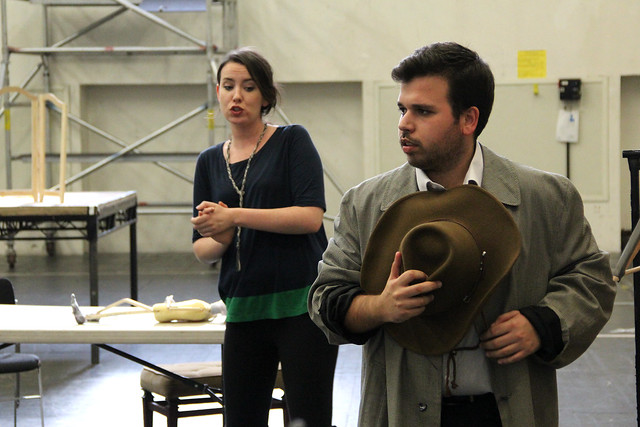 El gato con botas opens in the Linbury Studio Theatre on 16 October as part of Meet the Young Artists Week. Directed by former Jette Parker Young Artist Pedro Ribeiro, the production provides a showcase for the Young Artists, the future faces of opera.

The first opera by Catalan composer Xavier Montsalvatge, El gato con botas is based on Charles Perrault’s fairytale Le Maistre chat, known in English as Puss-in-Boots and featuring the character seen most recently in the Shrek series of movies.

‘El gato con botas has a terrific score and poetic libretto that will bring playfulness and fantasy back to the stage,’ says Pedro. ‘We are playing with the planes of reality, creating a world where dreams become real.’

The story follows a hapless miller, who laments his bad luck when left nothing but a cat by his deceased father. However, the cat that he so reluctantly inherits soon involves him in a world of magic, castles, ogres and princesses.

For the production, Pedro worked with London-based Australian designer Simon Bejer. They drew their inspiration from traditional Iberian toys and puppets. ‘It's great to immerse oneself in the trunk of old memories, finding the fables and toys that filled our childhood,’ says Pedro.

Each singer will interact with a series of marionettes, finely-detailed, specially designed pieces crafted in London and Portugal. Joining the singers in performance will be Portuguese puppeteers Rui Rodrigues and Sara Henriques of Red Cloud Puppet Theatre and new Jette Parker Young Artist Stage Director Greg Eldridge, who is also assisting Pedro Ribeiro. Alongside a cast of ladies-in-waiting, chamberlain and royal family, the production will feature a grotesque ogre described by Simon as ‘half-human, half Frankenstein’s monster’, a role performed by Jette Parker Principal Jihoon Kim.

El gato con botas will be staged alongside a concert performance of Berio’s Folk Songs, performed by Serbian soprano Dušica Bijelic. This will also feature Southbank Sinfonia, this time under the baton of Italian conductor Michele Gamba.