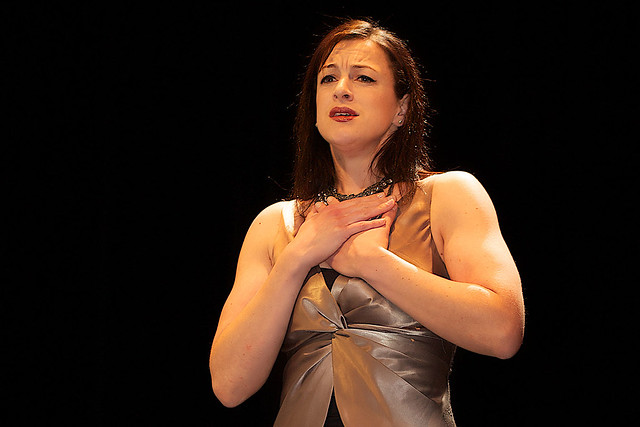 Stepping off the plane at Hobart is a little like coming home for a Kiwi.  You're met with an advertisement of the vista of the city, nestled as it is within the hills and by the sea, very much like Wellington.  It's unlike the rest of Australia - an island that slowly drifted from Gondwanaland, just as New Zealand did.  In that way, it seems completely apt that Haydn's L'Isola Disabitata is being presented here.  Living on an island gives one a sense of isolation and purpose that doesn't seem to inhabit the minds of continental people.  Hobart town is a mix of old grandeur and new economized 'sculptural' architecture. Some of it works, some doesn't, but you certainly get the sense that this town has something to prove. It has an individuality and air of self-sufficiency.  This is certainly true of Tasmania's musical life, its Symphony Orchestra, for instance, being one of the most renowned in Australasia.

There is was a sense of intense excitement in the air when I stepped in to Hobart's Theatre Royal - a gorgeous, well-loved Georgian opera house.  The buzz here, of course, was about the new Hobart Baroque Festival.  A new venture, it has made the bold and wonderful step of collaborating with The Royal Opera and bringing the production of Haydn's little-known L'Isola Disabitata to Hobart.  I'm personally more excited than anyone, since I get to sing the role of Costanza - the despairing 'forgotten one' on the island, who had been abandoned eight years earlier with her younger, innocent sister, Silvia (the marvellous Anna Devin in this case).  Moreover, I was at the premiere in October 2010 when the production by Rodula Gaitanou was part of the Jette Parker Young Artists' Meet the Young Artists Week at the Linbury Studio Theatre at The Royal Opera House.  It was incredibly moving and so beautifully realized - I was a mess of tears by the end and here in Hobart today, I feel a deep satisfaction in the knowledge that people in the city are going to be completely blown away when it comes here in April.

After singing Costanza's first aria during the launch, it has dawned on me what a fantastic project this is and how proud I am to be representing The Royal Opera, especially in this instance as I feel it's so important for these productions to be shared and for Hobart to feel that they're bringing such a gift to the rest of Australia, which they really are.  The bearer of that gift is arts patron, Leo Schofield, a big name in Tasmania who has organised the festival along his co-producer, Jarrod Carland.  His enthusiasm is boundless and his passion for the project, infectious! Opera is for everyone - and if it can travel and be seen, it should.

Find out more about the Jette Parker Young Artists.