Jerome Robbins: A master of both ballet and musical choreography

Balanchine's rival for the title of America's greatest 20th-century choreographer created ballets as well as the musicals West Side Story and Fiddler on the Roof. 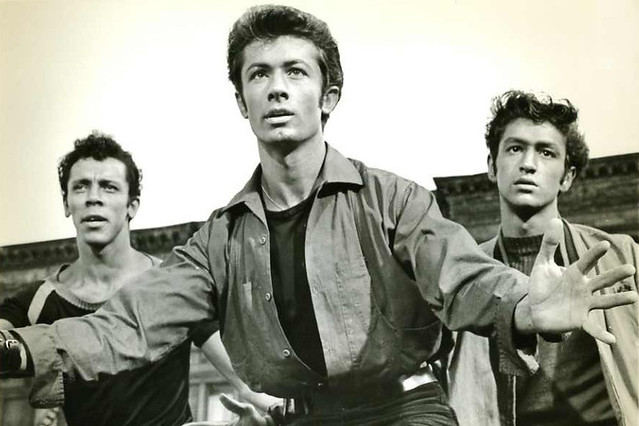 Frame enlargement from the 1961 film of West Side Story showing George Chakiris in the centre, choreography by Jerome Robbins

When British audiences think of American ballet, the name that naturally comes to mind is that of the ‘father of American ballet’, George Balanchine. While many will have heard of his successor, Jerome Robbins, the extent of this choreographer’s immense contribution to the history of American dance, and to ballet generally, is not always understood.

Robbins was born Jerome Rabinowitz in 1918, and raised in New Jersey. He began his professional career as a dancer, performing in Broadway shows and then with Ballet Theater (the company that was to become American Ballet Theatre). By the time he turned 25, many leading choreographers – including Balanchine, Leonid Massine and Michel Fokine – had noted his potential and created roles for him, the most celebrated of which was Fokine’s Petrushka. But, in spite of his success, Robbins felt a sense of disconnection from the repertory he was performing – ‘Why can’t we dance about American subjects?’ he once asked. Already a keen choreographer, he recruited a small group of dancers, commissioned a score from the then little-known composer, Leonard Bernstein, and created his first ballet, Fancy Free, in 1944. The work, which combined elements of classical ballet and jazz to tell the story of three young sailors on shore leave, was an instant hit, receiving 22 curtain calls at its first performance and catapulting Robbins to fame.

Over the next five decades, he won great acclaim as a choreographer and director. In a run of musicals for stage and screen, which included On the Town (1944), The King and I (stage, 1951; film, 1956), West Side Story (stage, 1957; film, 1961), Gypsy (1959) and Fiddler on the Roof (1964), he revolutionized the genre, moving away from the tradition of set dance pieces and instead integrating his choreography seamlessly with storylines, and using it to express the relationships between characters. This, as well as his tendency to choose subjects that addressed the lives and concerns of ordinary Americans won over audiences and critics alike. Robbins received a plethora of awards for his work on Broadway and film, including four Tony Awards, two Oscars, five Donaldsons and an Emmy.

At the same time, he became the first American to build an international reputation and an enduring legacy as a ballet choreographer. Following Fancy Free, he created series of short ballets on modern subjects for Ballet Theater. He left the company in 1948 to join New York City Ballet, where he became Associate Artistic Director the following year and stayed – apart from a few years out to explore experimental music theatre techniques – until the end of his career. Inspired by the NYCB's founder, his idol Balanchine, Robbins began to create increasingly abstract ballets that nevertheless retained his signature blend of dance styles and portrayed the intricacies of human interactions. From the sensitive, sensual Afternoon of a Faun (1953) to the Chopin ballets – including his wonderful comedy The Concert  – and later works such the energetic, postmodern Glass Pieces with music by Philip Glass, each Robbins ballet has a unique and brilliant character.

Life was not always easy for the choreographer. In spite of his tremendous success, he was a perfectionist who was never completely satisfied with his work. He was also a hard taskmaster, which meant that he wasn’t always popular; on one occasion his dancers for Billion Dollar Baby watched in silence as Robbins, walking backwards while delivering a tirade, fell into the orchestra pit. There were difficulties in Robbins’s personal life, too, including the immense guilt he felt after naming Communist Party members during the McCarthy witch-hunts of the 1950s.

Perhaps, however, such troubles helped him to understand and connect with the lives and concerns of ordinary Americans. Balanchine once said to the ballerina Violette Verdy that ‘the real American choreographer is Jerry, not me’; coming from the man regarded by many as the greatest choreographer of the 20th century, there could hardly be a greater endorsement of Robbins’ work, and of his powerful influence on the traditions, style and popularity of American ballet.

Jerome Robbins' In The Night and Afternoon of a Faun will be performed alongside Song of the Earth in the upcoming Royal Ballet Mixed Programme. Tickets are now on sale to Friends of Covent Garden, with General booking opening on 31 March 2015.

This article has been categorised Ballet and tagged Afternoon of a Faun, American Ballet Theatre, by Jerome Robbins, Fancy Free, Fiddler on the Roof, George Balanchine, Gypsy, in the night, Jerome Robbins, Leonard Bernstein, New York City Ballet, On the Town, Philip Glass, Production, The Concert, The King and I, West Side Story