It’s All in the Detail: Julia Trevelyan Oman’s immersive designs for La bohème

The Royal Opera’s 1974 production, on its last outing this summer, took a revolutionary approach to realism onstage, spearheaded by Oman’s meticulously researched designs. 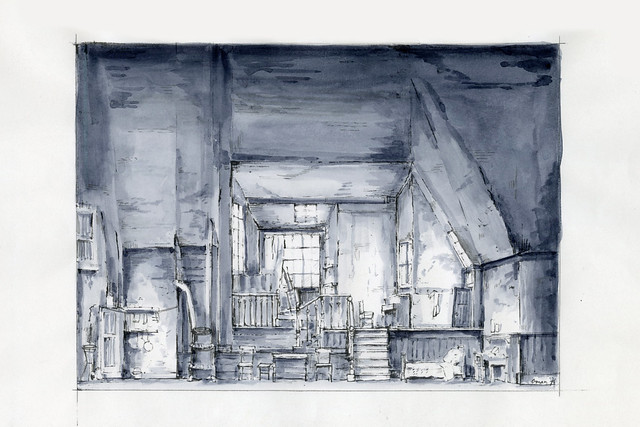 The Royal Opera’s 1974 production of La bohème, directed by John Copley and designed by the late Julia Trevelyan Oman, has its last outing in summer 2015. At 41 years it’s the longest-running production in The Royal Opera’s repertory. This remarkable longevity is usually attributed to two things: Copley’s understanding of the psychology of Puccini’s characters, and the immersive sense of realism created by Oman’s meticulously researched designs.

The Royal Opera House has teamed up with the University of Bristol Theatre Collection, home to the Julia Trevelyan Oman Archive, to create an exhibition dedicated to Oman and her research for La bohème. It’s a breathtaking opportunity to see the sources that directly influenced Oman’s iconic designs and appreciate the level of detail she used – as well as a rare chance to explore the wealth of the Theatre Collection. The exhibition is now on view in Covent Garden opposite the Box Office until the end of the 2014/15 Season, and can be explored online through the gallery below.

The Archive was created in 2003, when Oman’s widower Sir Roy Strong donated her work to the Theatre Collection. It holds more than 2,000 items, including original vintage photographs, reproductions of artworks, Oman’s own photographs of her visits to Paris, costume and prop designs and fabric samples. There’s also her comprehensive index card file and a collection of thank you cards from the productive team at the Royal Opera House, all grateful for Oman’s unfailingly detailed and highly organized approach.

At the time she was commissioned to create the designs for La bohème, Oman was working on a book about bohemianism in Paris (the manuscript of the proposed contents is also part of the collection). Much of her research for the book, and ultimately for the production, was carried out at the Warburg Institute Library, where her husband was a scholar. This academically rigorous background is evident in an article Oman wrote for the ROH Magazine in 1974, ‘Outside the Café Momus’.

The exhibition showcases Oman’s detailed research fed into every aspect of her designs: technical drawings for realistic props in the artists’ studio; Musetta’s fabulous tartan dress, both accurate to the period and on trend in 1974; research on architectural features and the influence on the revolutionary multi-level set design and realistic doors and windows; portraits of Henri Murger (whose stories inspired La bohème) and contemporary caricatures, vital to costume design for the more outlandish characters; and the specifically pastoral atmosphere created in Act III, to heighten Mimì and Rodolfo’s tragic love.

In the era of the internet it can be difficult to appreciate the time and care invested in Oman’s groundbreaking designs for La bohème. This exhibition offers a chance to reflect not only on her painstaking research, but also how Oman’s innate sense of theatre made her and Copley’s production of La bohème one of the most successful in The Royal Opera’s history.

Jenna Rossi-Camus is an independent curator and exhibition-maker with a background in theatrical design.

Find out more about the Julia Trevelyan Oman Archive at the University of Bristol’s Theatre Collection.