The Bulgarian soprano returns to the Royal Opera House to reprise her remarkable performances in La traviata. 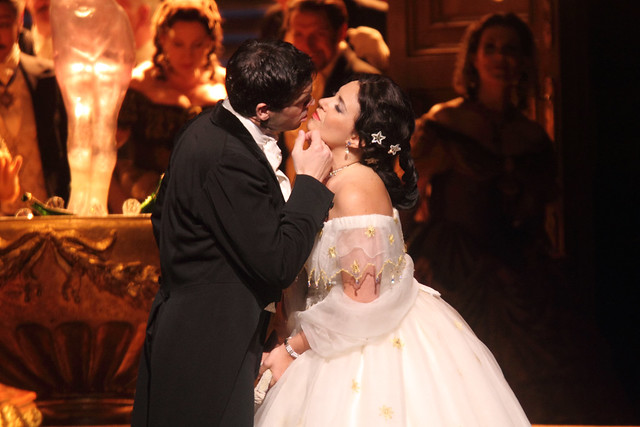 Ismael Jordi as Alfredo and Sonya Yoncheva as Violetta in La traviata, The Royal Opera © 2015 ROH. Photograph by Catherine Ashmore

Earlier in the month I had the privilege of being in the audience for Sonya Yoncheva’s Royal Opera House role debut as Violetta Valéry in La traviata. I have not seen so remarkable a performance of the role since Angela Gheorghiu appeared as Violetta on the first night of this classic production more than twenty years ago.

Sonya was born in Bulgaria, and in 2010 won the Plácido Domingo Operalia competition. For The Royal Opera she has since sung Musetta in La bohéme, and replaced Anna Netrebko as Marguerite in Faust last year. Among many other engagements around the world, she sang a remarkable Mimì in La bohéme for the Metropolitan Opera, New York, at very short notice earlier this year. The New York Times stated that ‘Miss Yoncheva seems an artist on the brink of a major career’.

The New York Observer was equally enthusiastic, saying, ‘That’s what happened when Sonya Yoncheva sang her first Met La traviata last Wednesday: I expected something lovely, but what I beheld was nothing short of magnificent.’

Sonya has been winning acclaim for her appearances around the world and is now under contract with Sony Classical. A new album of selected arias titled Paris, mon amour showcases her versatility. It is now available in the ROH Shop, in person and online; Friends of Covent Garden benefit from a 10% discount.

We now have five performances coming up with Sonya Yoncheva as Violetta and two are already sold out – so make sure you don’t miss out!

The production is generously supported by Rolex and is given with generous philanthropic support from Dr and Mrs Michael West.