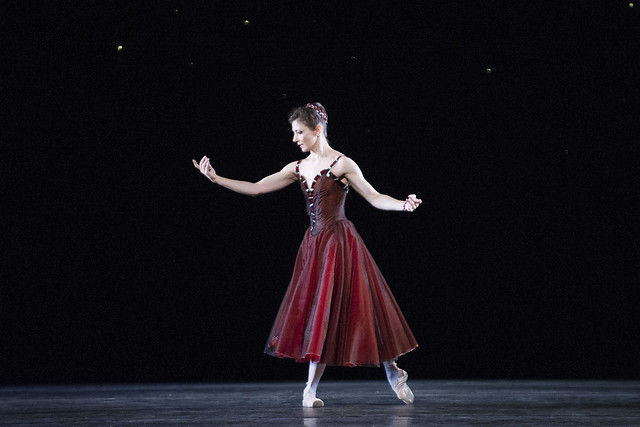 Alina Cojocaru in In the Night, The Royal Ballet © ROH/Tristram Kenton, 2012

Jerome Robbins’s In the Night is an insightful depiction of love’s twists and turns. The choreographer’s belief that ‘dance is about relationships’ is realized in the ballet’s three pas de deux – each set to a Chopin nocturne – in which subtle variations in Robbins’s choreographic language draw out the nuances of three very different love affairs.

The last of the duets is perhaps the most original in its reimagining of the pas de deux. In contrast to the rapturous young love that inspires the first partnership (and indeed many of ballet’s famous pas de deux), and the second couple’s sophisticated relationship, it is clear from the instant the last pair appears on stage that they’re involved in a stormy dispute. As the boundless melody begins, the man rushes on carrying his partner, her legs flailing. She struggles out of his grasp and runs away – before pausing, turning indignantly and stretching out her arms, furious, as he looks away. She spins into his body and they come together for a heated moment until the woman once again withdraws, sweeping her arms into agitated arabesques, which her partner echoes behind her.

Francisco Moncion, who created this duet with fellow New York City Ballet principal Patricia McBride, described it as ‘one of those on-again, off-again affairs’. Throughout the rest of the pas de deux, the conflict followed by passion, separation followed by entangled partnerwork, continues, ebbing and flowing with the undulations of Chopin’s nocturne.

Intense episodes see the woman flinging herself recklessly into the man’s arms, and he gathers her into ever more daring lifts – in arabesque, in a high fish dive and twice completely head-over-heels over his shoulder. In a particularly torrid moment, he skims her onto the floor (a movement that perhaps foreshadows the Bedroom pas de deux from MacMillan’s Manon). Between these passages of reckless love the dancers run off in exasperation – but every time they do so they are drawn back to one another. At one point the woman walks backwards towards the man with one hand reaching towards him, as if an invisible magnetic force is pulling her in.

Sometimes, amid this fiery argument, there are oases of calm. In the middle of the pas de deux there is a point when the man cradles the woman in his arms before lowering her to the ground, so that she stands gazing downwards, one had resting gently on his chest. Later, they stare into one another’s eyes, before dancing a softly lilting waltz.

At the end of the pas de deux, there is a marked change in mood. As Chopin’s expansive, passionate melody melts into an improvisatory coda, the dancers walk towards each other, she reaching out to him in a posé with her arms outstretched – the same step that she performed at the beginning of the duet, but now imbued with very different feeling. Face to face with her partner, she lovingly touches his cheek, crosses her hands lightly over his chest and kneels at his feet, palms upturned. Balanchine, Robbins’s mentor, hated this moment: ‘Can you imagine?!’, he is said to have carped; ‘An old man stands, and a beautiful woman in a beautiful dress goes down on floor. Can you imagine!?’. But, taking into account what happens next – the man lifting his partner reverentially in an arabesque high above his head, then collecting her in his arms and carrying her gently off – could this be seen instead as a mutual reconciliation at last?

The programme is staged with generous philanthropic support from Sarah and Lloyd Dorfman.