‘If you reach just one person through music, that is enough’ - Carmen Giannattasio on the challenges of being an opera singer

From gentle Mimì to regal bitch, soprano Carmen Giannattasio has surmounted immense challenges in her operatic roles as well as her private life. 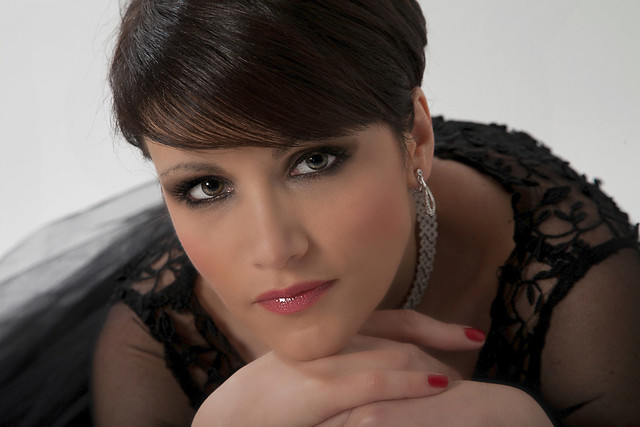 Carmen Giannattasio is very much a modern opera star – her lustrous, flexible soprano voice is particularly suited to bel canto roles, she is stylish and glamorous, astute with social media and a part-time model and ambassador for fashion and jewellery brands. She makes her third appearance at the Royal Opera House this Season as Nedda in Pagliacci, but the memory is still fresh of her electrifying Elisabetta in Maria Stuarda in 2014. Carmen was not only wearing what had to be one of the widest and heaviest dresses ever seen on the Covent Garden stage, but she also had to negotiate a crown and ginger wig, both of which she removed to reveal a bald cap, all the while singing long bel canto phrases and fiery coloratura.

Success came quickly for the girl from Solofra, a village near Naples in southern Italy. Carmen initially studied Russian language and literature at university, with the goal of becoming a journalist. ‘I thought I’d make a good journalist – I’m adventurous and have the right temperament. I was also having singing lessons though and after three years my teacher said: “I think there might be something interesting here, if we work at it.”’ She won a scholarship to the music academy at La Scala, Milan, where she studied with the Turkish soprano Leyla Gencer, a bel canto specialist. ‘She taught me that all opera is bel canto, from Monteverdi to Stravinsky. It is all “beautiful singing”, although of course there are different styles and dramatic accents. She said to me: “Even with Turandot, you must find a beautiful sound, sing the pianissimi: otherwise it is boring for the audience and bad for your voice.” So whatever character I perform, I always search for the beauty in the vocal line.’

It was good advice: Carmen won both First Prize and the Audience Prize at Plácido Domingo’s Operalia Competition in 2002 and her career seemed made. ‘I had the chance to start from the top, but to maintain that is hard work. I’ve had a couple of falls but made it back to the peak of the mountain.’ In what way? ‘Some events in my private life,’ she explains – more of which she elaborates on later. To those who have followed her career, however, her rise to the top has been a steady one. Originally booked to make her Royal Opera debut in Maria Stuarda Carmen’s first appearance at Covent Garden unexpectedly came two years earlier in 2012, when both the original Mimì and her cover were unable to perform in La bohème.

‘I live in London and had just come home from singing La traviata in Berlin. I had 20 days off and was looking forward to a holiday. Then my agent called – would I step in? I know and love the role so it was an honour – and I can even come home after work! It was a wonderful experience. John Copley’s Bohème is a dream, just what you’d expect from a romantic opera. Joseph Calleja and I were in tears at the end. I am so happy I had a chance to be a part of that historic production. And John is a lovely man and now a good friend; I feel honoured to know one of the best directors ever.’

Light years away from Puccini’s gentle seamstress was Donizetti’s historically fanciful version of Queen Elizabeth I – a steely antagonist to the saintly Maria, sung by Joyce DiDonato in Moshe Leiser and Patrice Caurier’s production. Was it difficult to portray such an unsympathetic character? Carmen laughs. ‘Yes, she is a bitch! People who know me came up to me afterwards and said: “What happened to you? You were so hard, so nasty!” I replied: “Thank you very much!” I had to work hard with Moshe and Patrice on finding that energy. Vocally too I had to experiment with the colour, to find how to sound acid and aggressive without compromising the technique.’

This December Carmen makes her role debut as Nedda in the young Italian director Damiano Michieletto’s new production of Pagliacci. ‘Nedda is a character who I feel is close to our times – she has married young to an older man, but it has not turned out how she hoped. He has his own troubles and doesn’t notice her any more. So she falls for someone else – but through a need for love and attention, not just sex. Then of course he realizes he is losing her but he reacts with jealousy – the need to avenge his honour becomes the most important thing. After all we are talking about a story originally set in southern Italy 100 years ago.'

Performed in its familiar pairing with Cavelleria rusticana, this production is set in contemporary times in southern Italy. ‘Damiano has shown me the designs, which could be now or 20 years ago. It is very believable and he has linked the two operas so I will be on stage during Cavalleria as a non-singing character, which is exciting. ‘It is a challenging role and to be able to perform it for the first time on the Covent Garden stage and with Tony Pappano is such good luck for me.’ Surprisingly, Pagliacci will be the first time she works with Pappano. ‘I met Tony years ago, his family comes from a town very close to mine, but this is the first time our schedules have allowed us to work together. I’m counting the days.’

And what of the recent modelling assignments for high-end fashion houses and jewellers – Carthusia, Antonio Riva and Bulgari – for which she is an ambassador? ‘I think I’m a pretty girl but I’m not tall and slim,’ she muses.

Images show Carmen in an array of spectacular dresses and rocking every hair colour from platinum blonde to ebony. She clearly enjoys playing with her appearance and style and she looks wonderful on camera. But she also has a serious message. ‘When I was very young I suffered from anorexia, and then later bulimia, in the middle of my career. I was losing my voice.’

Her lowest point came during a recording of Il pirata in London in 2010. ‘I was having a long period of bulimia after some sad things happened in my private life. It is an illness that is not all to do with weight control; it is also a way of seeking attention. In the middle of this crisis I realized I was destroying my voice, career and health all for the sake of what – five kilos? I said: “Look at yourself, why the hell are you doing this?” And of course I couldn’t find any justification.

‘At the time I was living one minute to the next, but I have now overcome it and am proud of that. This is why it is important to give the right message, especially to young girls – that if you have a skill or talent, how tall you are or what shape doesn’t matter. I am confident in myself and my success is self-made, and that is why these brands choose me to represent them. Of course it is nice to see yourself in a magazine too, wearing fantastic gowns – what woman wouldn’t like that? It is a lot of fun.

‘I used to reflect on my job – I am not a doctor or engineer, I don’t save people’s lives. In conversation with my mother I asked her: “Why do I sometimes feel useless?” And she said: “This is not true. If you reach just one person through music, that is enough.” Of course she is right; music is so important, so powerful. My career is everything in my life: the Italian word is abnegazione – a sacrifice – but it is also a privilege, a great gift.’