The way stories of rulers are told – like that of the Greek king Idomeneus – has changed over the course of history, determined by how society views them. 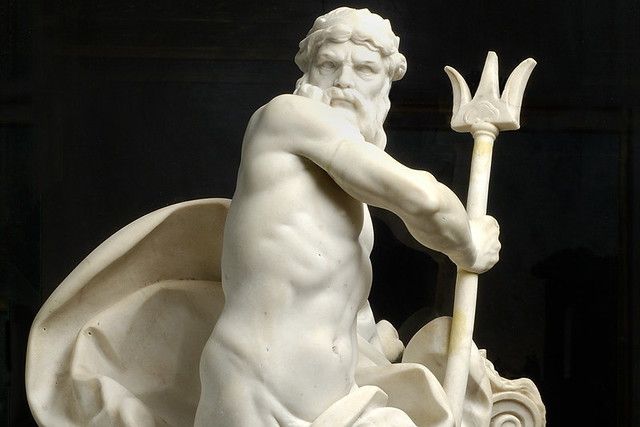 At first glance, the title hero of Mozart’s opera Idomeneo seems a tragic figure, entrapped by an evil fate. At a moment of mortal danger he makes a vow to sacrifice to Neptune the first person he meets, should he be allowed to return home safely – but that person turns out to be his son, whom he dearly loves. Yet neither Giovanni Battista Varesco’s libretto nor Mozart’s music offers a straightforward interpretation of the tale. This situates them in a tradition going back to antiquity, in which the heroes of yore were subjected to intense criticism, no matter how much they might also be admired.

The oldest traces of Idomeneus, the warrior of the Trojan War, are found in Homer’s Iliad. Idomeneus belongs to the first group of great Greek heroes who besieged the city. As the King of Crete he leads a considerable contingent of 80 ships to war against Troy. He is of advanced age, but like Achilles he is merciless in battle and an expert in the art of man-to-man combat.

For the Greeks, the Iliad and the Odyssey described the foundations of their community and were thus part of a historical continuum in which they also situated their own experiences. Initially, this stance was unproblematical, for when the Iliad was composed it reflected the self-image of the aristocrats before whom its verses were read. When the Iliad and the Odyssey took on their final literary form in the course of the 7th and 6th centuries BC, the Greek world was in the midst of major upheaval. Kingly rule had been replaced by other political forms – sovereignty shared by several aristocrats, or democracy. These changes made kingship obsolete, and rule by a single man was now regarded as ‘tyranny’ in the worst sense of the word.

There was something else, too: as the shape of the state changed and a new political life and self-awareness emerged, citizens felt able to ponder the position of the gods and their role. As early as the 6th century BC, scholars were confidently asserting that the gods were an invention of man, and that the monsters that figured in the old stories were just imaginary constructions. People began to tell their old stories in different ways.

The consequences of Idomeneus’ vow to Neptune, for example, was retold in two quite different versions. In the first, Idomeneus sacrifices his son but is then driven out by the people of Crete, so appalled are they by his barbaric behaviour. In the second, he intends to kill his son but does not do the deed and consequently plague breaks out. As the guilty party, the godless Idomeneus is compelled to leave the island and thus loses his throne.

The first variant was the great interest in the Age of Enlightenment. Here, Idomeneus is a brutal warrior who accepts the necessity of killing his own son in order to maintain his rule. The Cretan people, however, are no longer willing to tolerate such a violent act and so drive out their king. The people have as little fear of Neptune the monstrous macho god as they have sympathy for Idomeneus’ behaviour – which is why he has to lose his throne.

His people expect him to fight against the god’s demand, for they see it as an expression of an outmoded value system. But it is this system that Idomeneus himself still wishes to uphold. This tale reflects a dual process of emancipation – one that frees us from both our bondage to the gods, and the inappropriate self-interests of a ruling class ready and willing to commit the worst atrocities to maintain its position.

This is an extract from Martin Zimmermann's article 'Between Violence and Lies' in The Royal Opera's programme book, available during performances and from the ROH Shop.

The production is a co-production with Opéra de Lyon and Vlaamse Opera, Antwerp, and is generously supported by The Friends of Covent Garden.