In the 1930s, long before on-ice theatre adaptations became an arena staple, the ROH had its own skating rink. 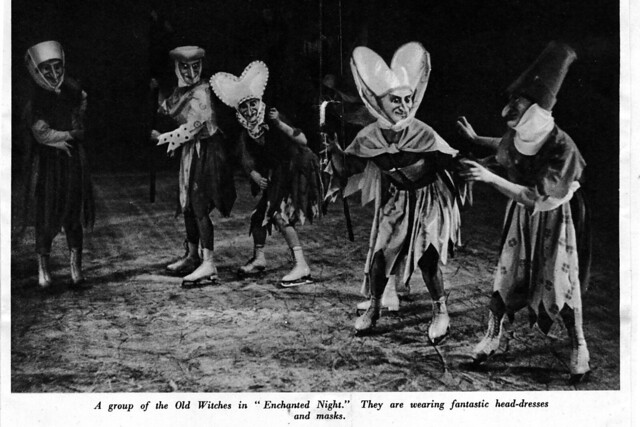 Enchanted Night as part of Rhapsody on Ice, 1937, at the Royal Opera House, Covent Garden © ROH

In 1937 a new art form graced the Royal Opera House stage – ice ballet. It was an ambitious project that saw the theatre's historic stage transformed into an enormous indoor ice rink.

Fusing together ice skating and ballet, Rhapsody on Ice was presented by ice dance impresario Claude Langdon as part of the Royal Opera House 1937/38 Winter Season. Langdon had already had success with the ice spectacular Marina, a mix of ice-skating, music and acrobatics first performed in Brighton in 1936 and later transferred to London.

After the success of Marina, Langdon told the Morning Post he had rejected many offers to stage something similar ‘for the reason that they wanted skating exhibitions, whereas our ambition is to develop and present a much higher form of artistic expression’. The historic Royal Opera House was the perfect venue for his vision, and when Covent Garden Musical Productions subleased the Royal Opera House from September 1937 to February 1938, Langdon leapt at the opportunity to present an ice ballet for the first time in the Opera House’s history.

Rhapsody on Ice was an ingenious attempt to adapt ballet technique to skates. Two ballets made up the show, accompanied by a full symphony orchestra. The first ballet, Enchanted Night, was set to music by composers including Schumann and Tchaikovsky. The second, The Brahman’s Daughter – described as ‘eastern’ in its theme – was skated to an arrangement of music by Delibes. The cast included some of the biggest names in ice-skating, including international champion Phil Taylor and 14-year-old Olympic Games ice-skater Belita Jepson-Turner, performing under the stage name Maria Belita.

Transforming the Royal Opera House stage into an ice rink was no small feat. To create a sheet of ice four inches thick Alpine Rinks Ltd., the builders of Britain’s first open-air ice rink, laid lengths of pipe across the stage and installed £10,000’s worth (the equivalent of more than £600,000 today) of ice-making apparatus in the wings. Thousands of gallons of brine were pumped in, and the special freezing gas needed had to be specially imported from America.

Harrison Thompson and Belita Jepson-Turner in The Brahman's Daughter, part of Rhapsody on Ice, 1937, at the Royal Opera House, Covent Garden © ROH

Belita Jepson Turner as the Witch in Gold and Phil Taylor as the Fire Devil in Enchanted Night as part of Rhapsody on Ice at the Royal Opera House, Covent Garden © ROH

Enchanted Night as part of Rhapsody on Ice, 1937, at the Royal Opera House, Covent Garden © ROH

Transforming the Royal Opera House stage into an ice rink for Rhapsody on Ice, 1937 © ROH

Programme for 'Rhapsody on Ice' which premiered on 26 October 1937 at the Royal Opera House, Covent Garden

Programme for 'Rhapsody on Ice' which premiered on 26 October 1937 at the Royal Opera House, Covent Garden

For the premiere on 26 October 1937 the glitterati descended on the Royal Opera House. Members of the audience included Queen Victoria Eugénie of Spain and the filmmaker Anthony Asquith; the Evening Standard ran an article on the dress of the various ladies in attendance. Comments from those who saw the production in rehearsal had been encouraging. An Observer journalist watched a midnight rehearsal and was certain that ‘Pavlova herself would have been enchanted by every moment’. However, once the curtain came down on the final act, Rhapsody on Ice received mixed reviews.

The skating itself was described as ‘prodigious’ by The Times. Phil Taylor’s trick jumping ‘took one’s breath away’ and Belita, trained by choreographer Anton Dolin, was the undisputed success of the night – the applause after her first bow held up the show for several minutes. Her technical skill and grace were praised across the newspapers, with the Daily Mail stating that ‘hers is the art of a genuine ballerina’. Nevertheless, only some of the artists were judged to have been successful in combining ballet and ice-skating. The production was not helped by overlong stories, unattractive sets and costumes and, according to the Daily Telegraph, ‘hackneyed melody… distorted in tempo and usually ignored by the skaters’.

Originally intended as a three-month run of twice-nightly performances, after three weeks Rhapsody on Ice struggled to fill the theatre and the show was closed. To fill the gap, the management hurriedly arranged a short season of opera in English.

Despite its short life, Rhapsody on Ice was an interesting experiment that tried to offer a new form of ice-based artistry. The fact that Langdon was able to present his ballet on ice at Covent Garden, a theatre with a rich artistic tradition, was a success in its own right.

Find out more about the other amazing stories documented in the ROH Collections.