Hurrah for Jane Henschel: 100 performances at the ROH 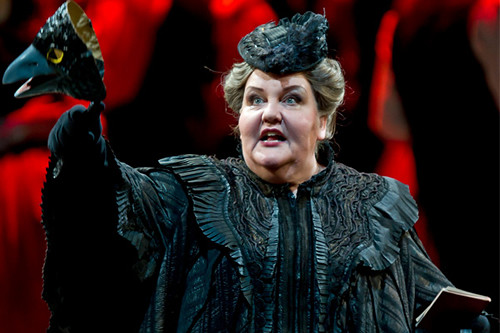 Congratulations to the American mezzo-soprano Jane Henschel who sang her 100th performance at The Royal Opera House this Friday (17 June). By good fortune, the event was a schools matinee so the youthful audience was in particularly fine voice to cheer Henschel’s remarkable powers as a dramatic mezzo.  She sang the role of Mrs Sedley, the laudanum-addicted old busybody, in Willy Decker’s production of Peter Grimes (21 June-3 July), a role she is new to.

Henschel has made something of a career of interfering women. Earlier this year she won acclaim as the Witch in Hansel and Gretel at the Royal Opera House.  She has also mastered the roles of  Janáček’s matriarchs, Kostelnička and Kabanicha, and  Strauss’s Clytemnestra, the murderous wife of Agamemnon. But, it is as the magical Nurse in Richard Strauss’s Die Frau ohne Schatten that she is most known. She has sung the part in Amsterdam, Berlin, London, Los Angeles, Munich, Paris, Vienna, and New York. She made her Royal Opera House debut in the role in 1992.

On hitting the hundred mark at Covent Garden, she commented  “I’ve had such a wonderful career and it’s fantastic to have been a part of this family here [at Covent Garden] for so many years. I’ve been lucky too — there’s always a bit of luck involved.”

Read the article on Jane's remarkable career in Opera Today.