How to Stage an Opera: Freud and Die Frau ohne Schatten

How changing attitudes to Freud have shaped the set designs of The Royal Opera's production. 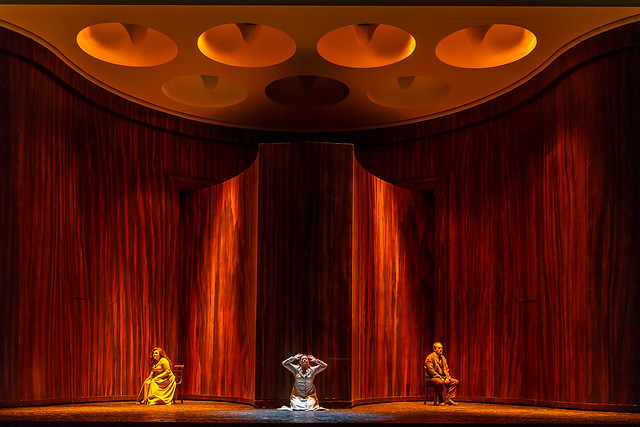 Our 'How to Stage an Opera' series offers different perspectives on the practicalities of staging an opera, from the initial research through to the final performance. In this the first in the series we look at the historical context of Strauss's opera and trace some of the thought processes that influenced the director and the designer's approach.

Die Frau ohne Schatten was written over the course of World War I and was first performed in Vienna in 1919. It is a child of its time. The theories of Freud and Jung on the action of the subconscious and the meanings of dreams had fundamentally altered the way people understood ideas of identity and motivation. A new mode of interpretation, of both fictional stories and actual events, had been created and was applied with abandon. Hugo von Hofmannsthal's libretto for Die Frau ohne Schatten is rife with fantastical figures that carry heavy symbolism, and a clear product Hofmannstahl's fascination with Freud's theories.

There are two challenges that face modern directors who wish to stage Die Frau ohne Schatten. The first is a recurrent issue in opera, of how to represent the extraordinary stage directions set down in the libretto. The second is more subtle and more challenging. The usefulness of Freud and Jung's theories has been sharply questioned in the years that separate us and the premiere of Die Frau, to the extent that Freudian interpretations can now seem almost laughably crude. And advances in gender equality have meant that many of the assumptions that underpin the symbolism of Hofmannsthal's libretto – that all women must want children, for example – seem at best old-fashioned and at worst offensive. The consequence is that the story of Die Frau ohne Schatten can seem little more than an alien artefact from a bygone era. The challenge for directors is to make a production that is true to the work and that speaks to the audience.

For The Royal Opera's new production, director Claus Guth and dramaturg Ronny Dietrich directly reference the influence of Freud on Hofmannsthal's libretto. They tell the story as a dream in the mind of a woman, where the weird symmetries, the oneiric leaps in time and space, the grotesque caricatures assume nightmarish significance. But in the space around her dreams Guth and Dietrich tell a further story. The dreaming woman is undergoing psychotherapy. She is surrounded – both in reality and in her nightmares – by authoritarian male figures. Questions are immediately raised. What is she being treated for? Is she held against her will? Can there ever be a cure? Through this device the creative team are able to represent literally the fantastical effects called for in Hofmannsthal's libretto while at the same time questioning the moral assumptions of the early 20th century that lie behind it.

In every opera the set design is crucial to the director's approach. It is the most visually obvious thing on stage and must fulfill vital practical requirements. Christian Schmidt's set design for Guth's Die Frau ohne Schatten is a masterpiece of efficiency in both respects. The curtain rises on a curved wall that entirely fills the stage, at once imposing and expansive. The dark wood colouring immediately suggests a clinic from the mid-20th century, while the smooth, endless wall seems to imprison the characters within it. A rotating middle panel acts as a door into the subconscious, creating the various worlds visited in the opera while leaving us firmly planted in the Empress's horrible reality – we, like her, are trapped. The large wall is a gift for the powerful singers demanded by the score, adding natural amplification that allows them to be clearly heard even when facing away from the audience. And the quiet, seamless set changes present no distraction from Strauss's thrilling orchestral interludes. 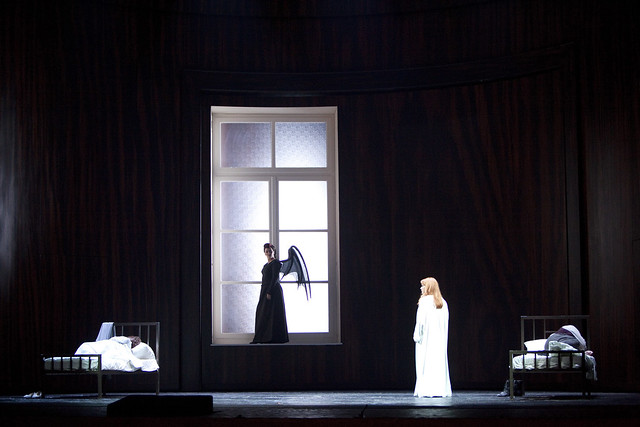 Guth's production of Die Frau ohne Schatten is an example of an interpretive approach to an opera that has always been a challenge to stage. Follow the next in our series to explore how directors have approached more familiar repertory – La traviata, and the period designs of Richard Eyre's production.

Die Frau ohne Schatten runs until 2 April 2014. Tickets are still available.
The production is a co-production with La Scala, Milan and is given with generous philanthropic support from Sir Simon and Lady Robertson, Hamish and Sophie Forsyth, The Friends of Covent Garden and an anonymous donor.