How to Stage an Opera: community in Dialogues des Carmélites 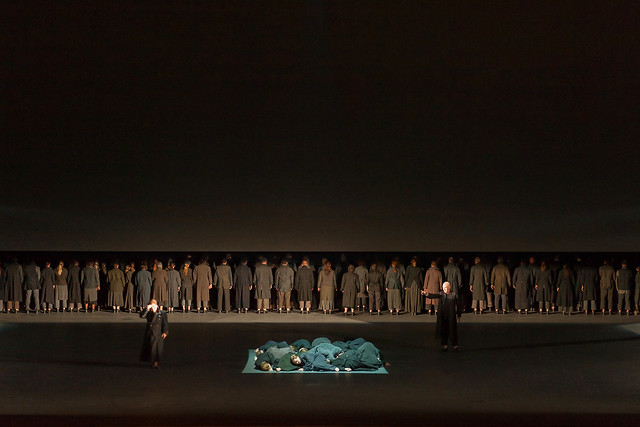 Our 'How to Stage an Opera' series offers different perspectives on the practicalities of staging an opera, from the initial research through to the final performance. Here we see how Poulenc's compassionate depiction of a tragic true event inspires a production that places people at its heart.

Dialogues des Carmélites poses a number of challenges to a director. It is composed in short scenes – 'dialogues' – separated by brief orchestral interludes, requiring speedy set changes. Its dramatic events are strongly tied to the specific historical setting of the French Revolution. And its finale calls for the onstage execution of 17 cast members.

Robert Carsen's production, first seen at Dutch National Opera in 1997 but first performed by The Royal Opera in 2014, sidesteps these potential problems. It has an unchanging set (designed by Michael Levine), an empty space bounded on three sides by smooth grey walls that stretch the entire height of the proscenium arch. On the large main stage of the Royal Opera House the space left seems huge, the people that move within it vulnerable, tiny figures.

This set is in part a literal response to a phrase in Act II, where Madame Lidoine attempts to comfort her sisters after their first night in prison with a reassurance that, after all, it's not so very different from their convent home. But throughout the opera the set provides a canvas for Jean Kalman's lighting design, which has a vocabulary wide enough to reflect onstage each change in colour in Poulenc's score. Without sets the upper part of the stage is left clear for Kalman's explicit and determined use of shadows, which loom monstrously above the people below.

For in place of sets Carsen has filled his stage with people. He places significance repeatedly on the physical realities of both the chorus of nuns and the wider society in which they live. By giving the French populace a presence they largely lack in the score for the opera he paints a balanced, compassionate and thus credible backdrop to the story. And by repeatedly drawing attention to the corporeality of the nuns, shedding brief light on what the realities of such a contemplative life might have been, he adds yet more horror to Poulenc's unbearable ending.

The curtain is raised as the audience enters the auditorium, revealing 17 neatly folded habits in the huge space of the stage. It is almost a memorial gesture, seeming to invite us to remember the real Compiègne martyrs. As the opera goes on Carsen time and time again calls our attention to the community of nuns that is the backdrop to Poulenc's drama. We see them kneel for what seems like forever throughout Blanche's interview with the Old Prioress; they prostrate themselves throughout the entire scene of the Old Prioress's anguished death; they sit quietly working through the scene where Blanche and Constance first talk together, and Constance foresees their deaths. Carsen so emphasizes not only the physical realness of the nuns but this idea of an ever-present community, preparing Blanche's final decision to rejoin her sisters at the scaffold. The representation of the nuns' deaths, as they enact gestures representing the words of their final prayer, is powerfully humble. 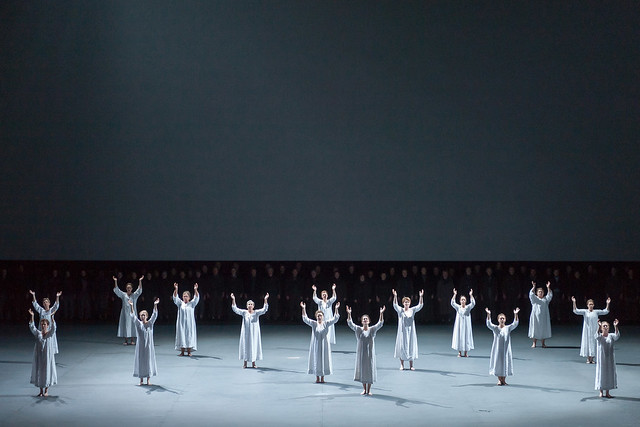 If Carsen has inflated the role of the nuns from Poulenc's score, he has done the same to a much greater extent to the French populace. In Poulenc's score the revolutionaries only shout from offstage, or murmur unintelligibly as troubled spectators of the final guillotining. But in Carsen's production they are an undeniable, ever-present force (with expert movement direction from Philippe Giraudeau) – even more so in The Royal Opera's production, where a new Community Ensemble has joined forces with the Royal Opera Chorus to create the largest acting troupe seen on the Royal Opera House stage. Carsen makes his point clear right at the start of the opera: the huge crowd makes a begrudging clearing for the opening scene in the aristocratic De La Force household, the effect heightened through Falk Bauer's costume designs where the bright colours of the coats of the Chevalier and his father create a glaring contrast against the drab greys worn by the chorus. From that moment on you feel the presence of the chorus even when they are offstage, an eloquent and pointed statement of the isolation of convent life. The chorus are a frustrated and silent force – one that, finally, won't be ignored any longer. 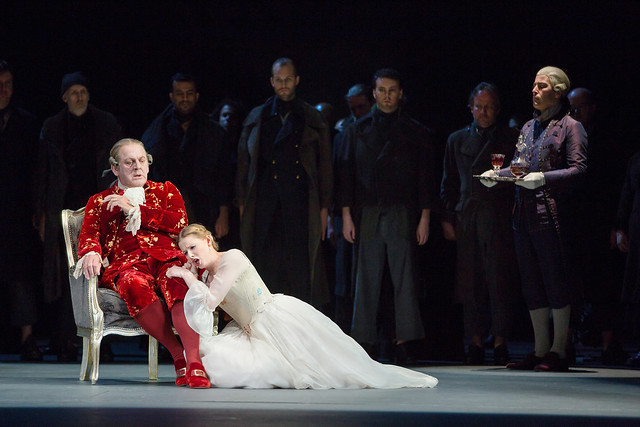 Carsen's production makes literal deviations from Poulenc's score. But Carsen and his creative team seem to remain true to its spirit, curating an environment that allows the realism and compassion in Poulenc's music to flare even more brightly.

Dialogues des Carmélites runs until 11 June 2014. Tickets are still available for the final performance.
The production, originally from De Nederlandse Opera, Amsterdam, is given with generous philanthropic support from Mrs Aline Foriel-Destezet, The Taylor Family Foundation and The Calouste Gulbenkian Foundation.

This article has been categorised Opera and tagged background, by Robert Carsen, Dialogues des Carmelites, How to Stage an Opera, introduction, Production, Robert Carsen