The Royal Opera’s Writer in Residence reflects on how directors choose to stage grand opera in the modern day. 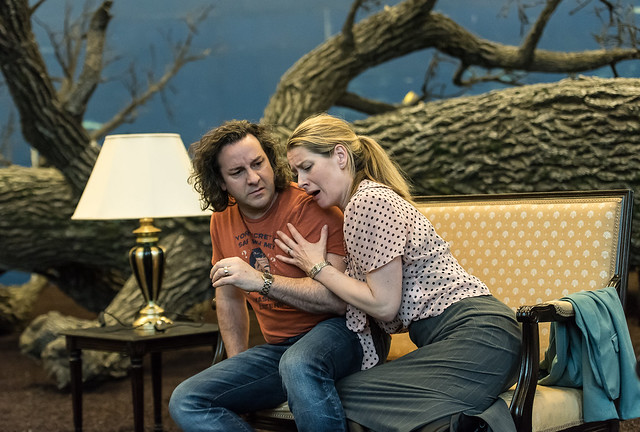 John Osborn as Arnold and Malin Byström as Mathilde in rehearsal for Guillaume Tell, The Royal Opera © 2015 ROH. Photograph by Clive Barda

For me, Guillaume Tell has the potential to be compelling drama, and Damiano Michieletto’s production, conducted by Antonio Pappano, succeeds on these terms. There is extraordinary nuance of expression in the vocal parts and the orchestra, there are moments that are very moving (notably the Act I trio, Tell’s Act III ‘Sois immobile’), thrilling (the finales to Acts I and II) and uplifting (the finale moments of the opera). Damiano has created a strong sense of direction and focus in this enormous sprawling drama: Tell and Arnold in particular making powerful journeys as characters – Tell ‘becoming’ Guillaume Tell the hero, Arnold finding inner strength, but ultimately damaged by the process of war; and Tell’s son Jemmy helps to bring different parts of the storyline together through added scenes of pantomime. The singers – soloists and choruses – and the enormous number of other personnel (assistant directors, stage managers, répétiteur, assistant conductors, vocal coach, movement coach and many more) have thrown themselves into the project, and taken the drama seriously. I’ve really enjoyed attending rehearsals and seeing the production evolve over the past six weeks: it has been a privilege. Here is Gerald Finley (Tell) writing about the process.

The opera and the production raise some interesting questions though, and it is on these that I’d like to focus in my final post – and invite you to join the conversation. 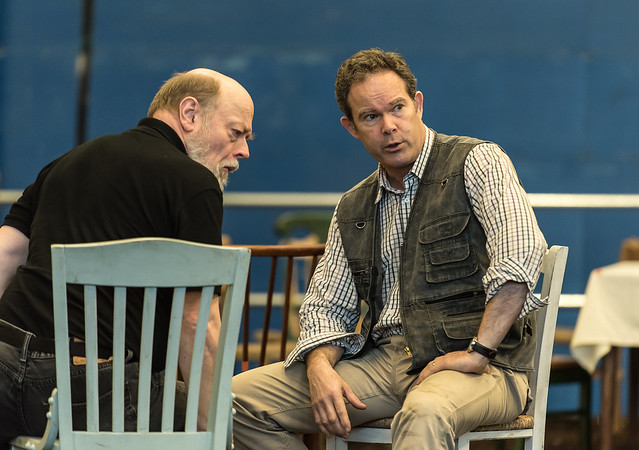 Eric Halfvarson as Melcthal and Gerald Finley as Guillaume Tell in rehearsal for Guillaume Tell, The Royal Opera © 2015 ROH. Photograph by Clive Barda

The setting has been updated from the 14th to the 20th century, and the symbolism of the Swiss Alps (purity, nobility and freedom) has been replaced with a much darker metaphor. The uprooted tree that dominates the stage for much of the opera stands for an uprooted people – and the rich soil is where their bodies are buried and new life is born.

Part of me misses the sublime tableaux of mountains that frame the opera, the tangible ever-presence of weather – notably the storm, but also the sunrises – and the sense of space (vertical as well as horizontal) that the setting implies. But the modern setting is a powerful updating: it brings the human drama to the surface, its details inspired by the libretto, and the brutality of the gun-wielding Austrian soldiers helps to sharpen the central conflict in a manner readily familiar to modern audiences who might be a bit hazy about the historical events. However, the ‘historical’ Tell who haunts the hero through the opera – and the footage from the comic book that scrolls across a screen at the beginning and the end of the opera – remind us of the legend, rooting us in its romance, and guide us through the details of a story that is much less known today than it was in the early 19th century. We arguably have the best of both worlds here.

Audiences in the 19th century would have gone to see the same opera many times, discovering more on each visit. Given that modern audiences – generally – will see a production only once, it has to be immediately legible and persuasive, and for me a strength of this production is that the drama is generally very clear, and actions motivated. But perhaps my attending of rehearsals has contributed to this. What did you make of it? Did it make sense? Were there specific aspects that you particularly enjoyed or disliked? What about those pantomimes that replaced the Act I and III ballets – did they help to develop the characters, or distract from the drama? 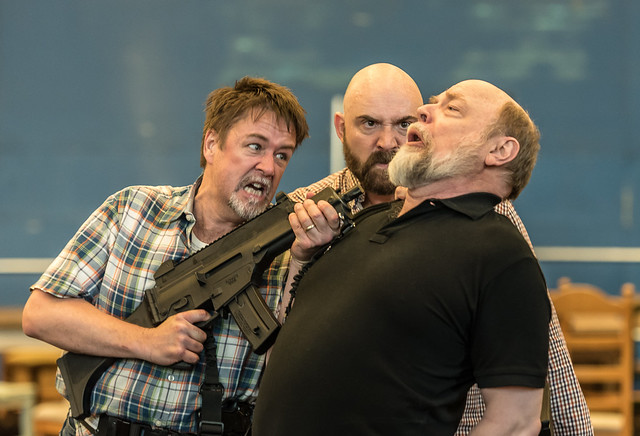 Michael Colvin as Rodolphe and Eric Halfvarson as Melcthal in rehearsal for Guillaume Tell, The Royal Opera © 2015 ROH. Photograph by Clive Barda

We are regularly told that modern (British) audiences are conservative, that anything other than Traviata, Bohème, Carmen, Figaro is a big financial risk. New works often struggle to find an audience, as do ‘new’ old works – operas such as Tell – that are no longer in the regular repertory. Does this mean that we have a responsibility to go to see new works, to ensure opera companies continue to schedule a wide repertory? Do opera companies and directors have particular responsibilities when staging unfamiliar works?

‘Given that this production will in all likelihood be the audience’s one and only chance to experience Chausson’s opera, this kind of treatment of the work seems especially unfair. … such pieces deserve productions that help the audience to grasp an unfamiliar work and do their very best for pieces which have frequently languished in the shadows’

Are special efforts required to make a new work accessible? Are there aspects of 19th-century operas that are particularly problematic for our modern taste – lengthy ballets, obscure political references, complex and involved plots, extravagant scenery, big static concertante ensembles, unabashed sentimentality, too much recitative? Do these need to be addressed by directors, or are we willing to accept operas on their own terms? What sorts of ‘help’ do we appreciate? From directors, from opera companies?

I look forward to hearing your comments!

This article has been categorised Opera and tagged by Damiano Michieletto, Guillaume Tell, Production

This article has 174 comments