In this pas de deux of astonishing intensity, Giselle begs for the man who caused her death to be forgiven. 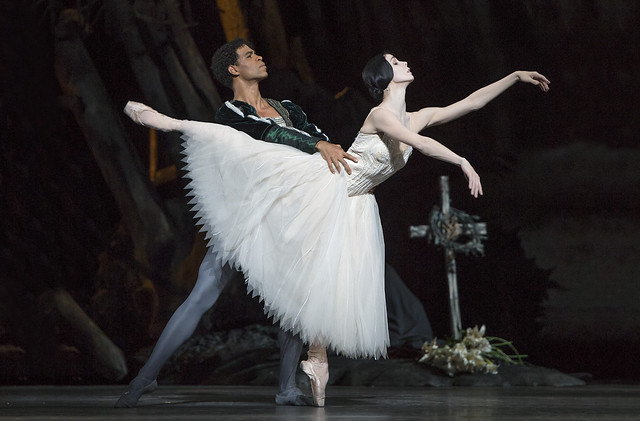 Natalia Osipova as Giselle and Carlos Acosta as Albrecht in Giselle, The Royal Ballet © ROH/Bill Cooper, 2014

Peter Wright’s Giselle, drawing closely on Coralli and Perrot’s original 1841 ballet, is filled with energetic, bravura dancing. The heroine in Act I is a bundle of youthful enthusiasm, eager to show off her dazzling steps at any opportunity. Her first appearance in Act II is another brilliant, ferocious display. There is also the small matter of the dance forced upon Hilarion by the Wilis (spirits of women deceived by their lovers) in Act II, which is so energetic that it leads to his death. But the emotional climax of this ballet is a pas de deux characterized by its breathtaking stillness. It begins with Giselle rooted to the spot – the polar opposite of the pyrotechnics that surround it.

Deep in the forest, Albrecht has come to pay his respects at Giselle’s grave, guilt-ridden at having brought about her suicide by his deception. He is suddenly ensnared by the ethereal Wilis, the spirits of jilted women who exact revenge on any man who crosses their path by forcing him to dance to his death. Giselle has become one of them, bound by the circumstances of her death. However, once Myrtha, the Queen of the Wilis, commands Albrecht to begin his deathly dance, Giselle intervenes. And although what follows is a pas de deux, Giselle begins it very much on her own.

To the soft strains of a solo viola, Giselle brings her right leg up in développé and turns in arabesque – all with glacial slowness. Even with her one jump, and its fleeting entrechat quatre, she stays on the same spot, seeming trapped, unable to escape. This mirrors her situation: her ‘unholy’ death by suicide has denied her a Christian burial, and her continued desire to help Albrecht alienates her from the Wilis – she is now truly alone. When she does move, running pleadingly towards the ranks of Wilis on either side of the stage, they coolly shun her: all that is left for her now is an unhallowed grave.

As the woodwinds join the viola, Albrecht now joins Giselle, supporting her through sorrowful lifts and turns, filled with remorse at the fate of the peasant girl he cast aside. At the tender conclusion of this adage Giselle places a consoling hand on Albrecht’s shoulder, a final act of forgiveness that she grants despite her own fate already having been sealed.

Albrecht is at last forced to begin his dance for the Wilis as the pas de deux reaches its coda – but Giselle’s interventions have delayed it so long that dawn arrives, forcing the Wilis to retreat into the shadows. He survives, thanks only to the love of Giselle, faithful even in death. As the curtain falls we see Albrecht wracked with guilt – but the character who might better draw our sympathy is already dead.