Jessica Duchen speaks to the composer about his new opera. 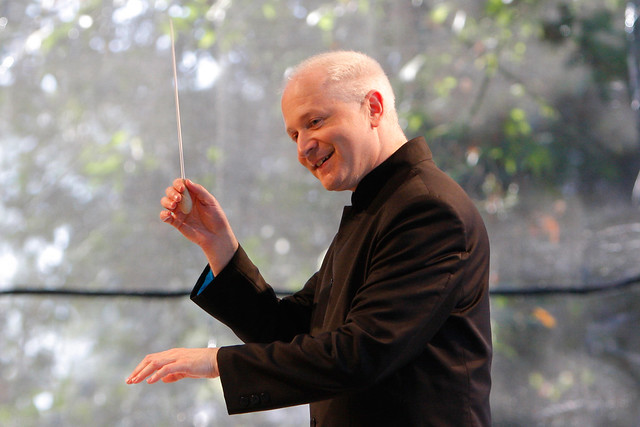 Following its premiere at last year's Aix-en-Provence Festival, George Benjamin’s Written on Skin was hailed as a masterpiece. Depicting a violent love triangle, the opera is set in the 13th century but observed by a group of bitter, disillusioned present-day angels. It is the composer’s first full-length opera as well as his longest work to date, and emotionally it packs a tremendous punch. Like most great operas, it is about sex and death; but the precision with which Benjamin translates this unusual and devastating drama into musical terms could have come from his pen alone.

When Benjamin, aged 14, became the youngest pupil of Olivier Messiaen, it was clear that his was a talent to watch. He was only 20 when his orchestral work Ringed by the Flat Horizon [Spotify] was performed for the first time at the Proms and provided a major breakthrough; since then his works have been few in number, but great in impact, microscopically sensitive and finely wrought.

‘I had been hoping to write a full-scale opera ever since I started composing,’ Benjamin says, ‘so I had been thinking and thinking about the issues involved for over half my life.’ His partnership with author Martin Crimp was the clinching factor: the pair first collaborated on a 35-minute opera, Into the Little Hill, which proved so successful – both with the public and in terms of their working relationship – that it paved the way for a more ambitious effort.

In Written on Skin, music and text are knitted together inextricably – not least, thanks to Benjamin’s celebrated perfectionism. ‘I work incessantly on my pieces and particularly this one,’ he says, ‘with a lot of reflection and a lot of sketching until I get the notes I really want.

‘Some composers write quickly and easily; others chisel away, sometimes producing very little, but the very little is wonderful. Everybody’s different. The thing is to find the way you function as a composer and to remain true to that. I love detail, but I also like big, formal shapes; the mixture of those two is quite challenging. One can’t achieve perfection – but I like the idea of at least failing on the way to getting near it!’

Benjamin crafted Written on Skin specifically for its performers, with the versatile soprano Barbara Hannigan, the counter-tenor Bejun Mehta and the British baritone Christopher Purves forming the central triangle: ‘I enjoyed the inspiration I got from their wonderful qualities – they’re all amazing – but also this was a very helpful way of focusing my writing.’ He wished to make the vocal lines, ‘authentic, singable and expressive’, while ‘a great priority was the harmonic embedding of the vocal lines within the orchestral texture – there is an easily perceptible fusion.

‘It was important to me that the voices not only had to be audible, but shouldn’t be forced – so the orchestral background is often discreet and quiet. But I do have a huge brass section and a lot of percussion, so at the rare moments when the orchestra erupts, it’s a bit of a shock. Maybe it’s more potent by being used only occasionally and at surprising moments.’

The instrumentation includes, unusually, a viola da gamba, but the rarest timbre of all is the eerie magic of a glass harmonica. ‘I thought that the strangest colour I could use would be this beautiful instrument: it has all sorts of capacities that have never been exploited – above all its harmonic capacities. I love it, and it makes, I think, an extraordinary sound.’

Listen to an ROH Insights session with George Benjamin, Martin Crimp and the cast

Written on Skin runs from 8 - 22 March. Tickets are still available.

The production is generously supported by the Colombia Foundation of San Francisco and the Peter Moores Foundation.