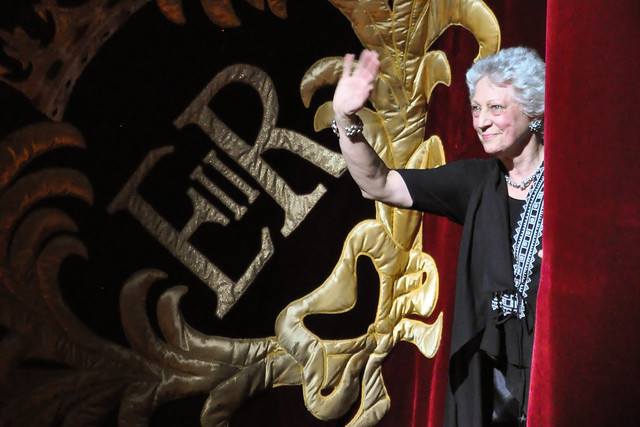 The curtain came down last night on Monica Mason's tenure as Director of The Royal Ballet with the final performance of Metamorphosis: Titian 2012.

The dancer-turned-Director took up the position in 2002 and since then has overseen a successful decade for the company. Her tenure has been marked by the ushering in of new choreographic talent such as Wayne McGregor and Christopher Wheeldon and by programming that has blended experimental new work with repertory classics.

The end of an era was marked by a traditional flower throw for Dame Monica, who joined the Company on stage. A short speech was given by Chief Executive of the Royal Opera House Tony Hall who praised her for what she had given the Company over a 54 year career. Dame Monica also gave a speech herself. The evening also marked Tamara Rojo's final performance as a Principal of The Royal Ballet, though she will return as a Guest Artist.

See pictures of the event, taken by The Ballet Bag:

Watch the recent ROH Insight session, featuring Alan Titchmarsh interviewing the Director about her time with the Company.

Dame Monica will be succeeded as Director of The Royal Ballet by Kevin O'Hare.