From the archives: The 1856 Covent Garden Fire

160 years ago this weekend, a fire destroyed the Royal Italian Opera and led to the building of the current Royal Opera House. 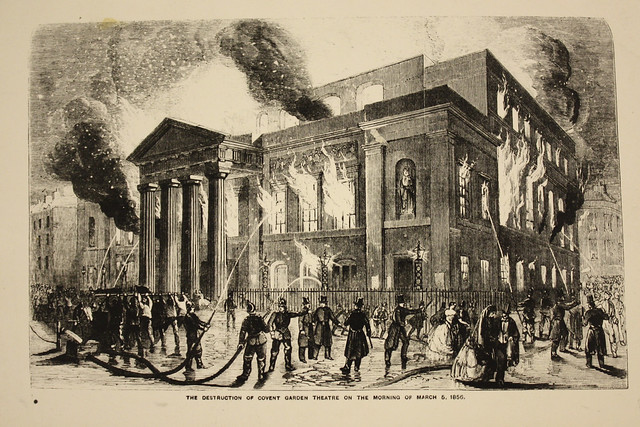 Saturday 5 March marks the 160th anniversary of the fire that destroyed the Royal Italian Opera, the second theatre to stand on the Covent Garden site.

Frederick Gye, manager of the Royal Italian Opera 1848–78, kept diaries that give fascinating insights into the fire and the theatre’s subsequent rebuild, as well as the day-to-day management of a 19th-century opera house.

Gye was in Paris when he received word that his beloved theatre was on fire, just weeks ahead of the opening of the opera season. The theatre had been leased to the showman magician Professor John Henry Anderson, also known as the Wizard of the North. On 29 February 1856 Gye records that he had refused permission for Anderson to end his season with Bal Masqué (masked ball). But on 6 March, the day after the fire, a regretful Gye records that he eventually agreed ‘out of good feeling’ to allow Anderson’s ‘wretched Bal Masqué to take place’, due to losses Anderson had incurred during his season.

On the morning of the fire, Gye records being awoken by a waiter with a telegraph, sent from London at 5am; it read ‘Covent Garden Theatre is on fire and the house cannot be saved’. Gye was ‘horror struck’. He left on the first boat he could book from Paris at 1.45pm and arrived in London at 4.30am.

The Illustrated Times reported that ‘At twenty minutes to five o’clock the company had dwindled to about 200 persons on the stage or ball room and the orchestra were in the act of playing the concluding bars of the National Anthem when a large portion of one of the fly scenes fell suddenly on the stage’. This was followed by sparks descending from the roof above the stage. Other contemporary articles and illustrations depict many party-goers in Bal Masqué costumes fleeing from the scene in terror.

Destruction by fire of the Theatre Royal, Covent Garden on 5 March 1856

The burning of Covent Garden Theatre – Flight of the Masqueraders – The Illustrated London News, 22 March 1856

Her Majesty Queen Victoria, accompanied by Frederick Gye and the Princess Royal, visit the ruins of the second Covent Garden theatre after the fire, 6 March 1856

Staff managed to save the cash box from the evening along with much of the stage machinery for Anderson’s magic tricks, but the majority of the theatre’s contents perished. Fire-fighters quickly realized that ‘all hope of saving any part of the theatre was futile and the twenty fire engines were exclusively devoted to throwing water on the surrounding property, and preventing the fire from extending to Covent Garden Market on the west, and Bow Street on the East’.

On arrival in London, Gye went straight to the site of his beloved theatre: ‘Drove to Bow St & beheld the ruins & fearful wreck of the poor theatre & all my vast property & all my hopes of the most promising season I had ever looked forward to crushed’. Gye was soon joined at the site of the fire by Queen Victoria, who went right into the ruined remains. Gye wrote ‘The Queen leaned on my arm, asked me many questions & showed great sympathy’.

Gye immediately set about arranging for his opera season to go ahead elsewhere in London. By 14 March he had measured up the Lyceum Theatre and set about successfully convincing singers to perform for a quarter of their agreed salaries, also organizing concerts at the Crystal Palace. Meanwhile, he began plans for the building of a new theatre – considering building a new theatre at Leicester Square, as well as the conversion of the National Gallery into a theatre. Ultimately, Gye renegotiated the ground lease for the Covent Garden site, and work on the third and present theatre, designed by Edward Middleton Barry, eventually started in 1857. The new building opened on 15 May 1858 with a performance of Meyerbeer’s Les Huguenots.

The Gye diaries are the property of Gye’s descendants and have been on long-term loan to Royal Opera House Collections since 1994. ROH Collections wishes to thank the generosity of the Gye Family for the the loan of this fascinating collection.

This article has been categorised Off stage and tagged Bow Street, Covent Garden, diaries, fire, Frederick Gye, from the archives, history, Item of the Month, local, London, ROH Collections