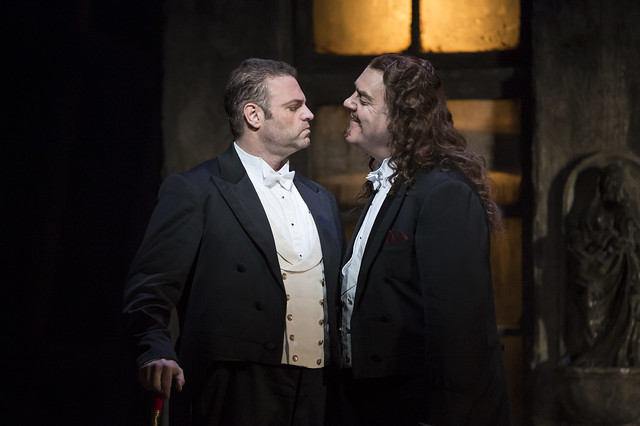 David McVicar’s Royal Opera production of Gounod’s grand opera Faust is to be broadcast live by BBC Radio 3 on 22 April at 6.45pm.

The production, which opened on 4 April, features a stellar cast including Bryn Terfel, Simon Keenlyside, Joseph Calleja (making his debut in the role of Faust) and Sonya Yoncheva, conducted by Maurizio Benini. Read audience reactions to the opening night.

Bryn and Joseph recently appeared on Radio 3’s In Tune to discuss the opera, chatting about the rehearsal period, characterisation and the challenges of singing in French.

Faust is a classic tale of romance and temptation. Find out more about the devil in opera. Historically one of the most popular and most performed of all operas at Covent Garden, it is packed with instantly memorable tunes and showpiece arias. Highlights include the Soldiers’ Chorus in Act IV, Méphistophélès’s ‘Song of the Golden Calf’ and Marguerite’s iconic Jewel Song, one of the most famous soprano arias in all opera. Find out how Gounod uses waltz songs throughout the opera.

Faust is part of Faustian Pack, set of works that explore our fascination with the story of Faust. Forthcoming events include a Faust-inspired performance by Street Stories in May. The programme also featured two Royal Opera commissions in the Linbury Studio theatre, Luke Bedford's Through his Teeth and Matthew Herbert's The Crackle; as well as an Insights event with prize-winning author Hilary Mantel.