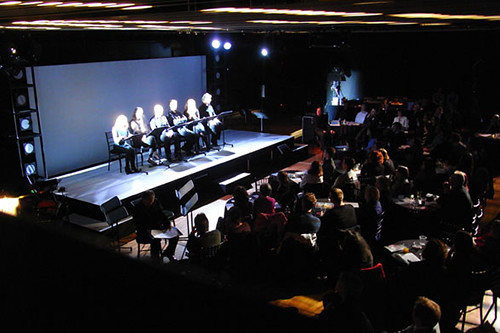 Back again this February from ROH2 is Exposure - a unique opportunity to hear snapshots of new opera work-in-progress, all in the stylish surrounds of a recreated cabaret club complete with chairs, tables and a bar in the Linbury Studio Theatre.

ROH2’s opera development programme works with a number of composers, librettists and directors, running a variety of courses and workshops throughout the year. Courses include ‘VOX – composing for voice’ (for composers), ‘The Singing Word’ (for librettists) and ‘The Operating Table’ (for directors). For other composers, the programme funds a small number of workshop weeks throughout the year which give composers and their librettists the chance to develop their work over an intensive week with singers.

Exposure aims to bring together extracts of all the work being developed under one evening, allowing the composers  to have their work aired to the public in a fun, informal atmosphere. The layout of the Linbury Studio Theatre is turned on its side, and audiences sit at small cabaret tables, with drinks from the bar, and enjoy an eclectic evening of innovative work.

This year's Opera Exposure runs from 3 - 5 February and for more information and to book visit the Exposure production page.

Below, you can read a short question and answer session with three of the composers who have had workshop weeks funded by ROH2’s Opera Development Programme, and extracts of whose works are presented in Exposure - Laura Bowler, Andrew Lovett and Stephen McNeff. 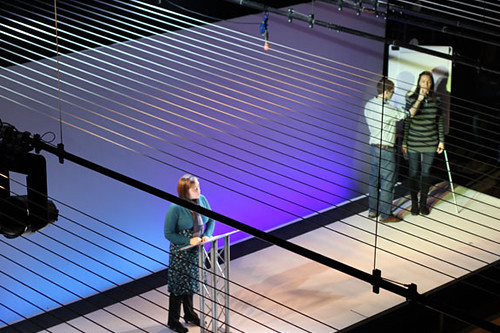 Laura is a young composer and mezzo-soprano based in London. This is the second time she has featured in Exposure and the opera she is working on is called Sandman, which was work-shopped previously with ROH2.

What are your feelings on being involved with Exposure for a second year?

It's a fantastic opportunity for me to show the ROH audiences what I'm up to, so being involved for a second year is extremely exciting and always a helpful and eye opening experience.

Is there anything you can you reveal about your opera that's being performed?

I'm working on a chamber opera with the BBC Radio Playwright, Lavinia Murray, which is loosely based on E. T. A Hoffman's The Sandman. Having spent a week work-shopping the piece with ROH2 earlier this year with John Lloyd Davies and Lindy Tennent-Brown, I felt that this would be a great opportunity to show people what we've been up to behind the scenes. The opera is quite eclectic in its themes ranging from the real world to the sub-conscious world of alter-egos of the protagonist child who lies in a coma. I have described my ideas to John Lloyd Davies as me trying to do what David Lynch does in film in opera! Lavinia and I have already worked on 3 projects together, and this piece is one of two current projects we're working on. I'm lucky enough to be able to have one of my dear friends and talented musicians, Joseph Bolger cast in this excerpt as the countertenor Sandman. He's already worked with me and my theatre company, Size Zero Opera, and I wrote a work for him with Symphony Orchestra, which is always a rare opportunity for a countertenor, so it's great to have him on board in this as well!

You've been involved with ROH2's VOX training programme - can you tell us a bit about your experiences?

The VOX Programme is a mind opening experience, with a hugely diverse array of composers involved it shows that the ROH2 are clearly interested in stretching the boundaries of Opera, or even breaking them! It shows a clear belief in supporting what's good, innovative and will draw audiences in. My memories of VOX 2007-08 (I think) consist of experimentation, making mistakes, stretching my ideas of what theatre and opera can be as well as some seriously heated discussion! It's always good to get people's passionate views flying across the room!

What's up next for you?

Aside from Sandman, I'm also writing a work with Lavinia Murray that will be premiered at London's Little Opera House with my company, Size Zero Opera, during our residency there in May with singers Joseph Bolger, Sian Cameron and Rachel Gilmore. We will also be premiering works by young composers, Ben Gaunt, a work for myself (mezzo-soprano) and megaphone, and a work by Joseph Davies (part of the VOX 2011) for myself and Alto Melodica. I'm also working with RADA on an incidental score for their production of Noel Coward's The Young Idea running from Feb 10th-19th, and a work for the BBC Symphony Orchestra exploring the application of Antonin Artaud's Theatre of Cruelty to music performance and composition. Slightly longer term, I'm working on a cello concerto for Oliver Coates, "Two Rooms - A Cello Concerto in Two Acts", with the assistance of Paris based electronics composer Kasper Toeplitz and a work for the Kreutzer Quartet with Double Bassist, Rachel Meerloo and Mezzo-Soprano (myself). Alongside all of this I'm also doing my PhD as an AHRC Scholar at the Royal Academy of Music supervised by Gary Carpenter and Harrison Birtwistle.

You can find out more on Laura on her temporary profile website and her permanent blog. 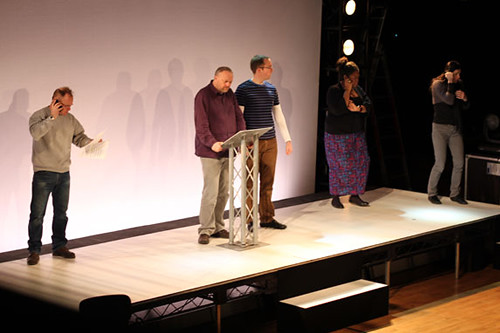 Andrew is currently collaborating with writer Fraser Grace on a new opera, Don’t Breathe A Word, from which an extract will be performed at Exposure.

How's the preparation going for Exposure?

I live in Princeton, NJ, in the US at the moment, so the main preparation has been organising the travel - and hoping that we don't get another blizzard at Newark airport.
Can you tell us a little bit more about the extract from your opera Don't Breathe a Word ?
The extract from my Don't Breathe a Word comes from a section that was completed a few weeks ago. It's close to the end of the first act. I've not heard this material before, nor has Fraser, the writer, who doesn't know yet what I've done with his words (there may be some surprises). The singers are also new to the project. The main role is a complicated figure: a very english kind of hero, so I'm curious to see a different personification and whether that affects our conception of the role.
What are your thoughts on the ROH2 workshops for Don't Breathe a Word?
It's hard to stress enough how vital the development workshop was last March. This has been a long complicated - one might even say operatic - venture. The serious and committed input from performers and staff at ROH2, gave us a wealth of information and experience. It took many months to assimilate, and then to re-write the opening of Part One. Most of all, we felt tremendously encouraged. The excitement around the piece was palpable, and that gave Fraser and I the energy to push through the re-writes and get to the end of the first half of the piece - which I finally managed in early january 2011.
What do you have planned next?
My first priority is to complete Don't Breathe A Word. I've been working on it since 2006, so it's been a long process. We had a lot of guidance and input on the dramatic shape for part 2 and this gives us confidence for the writing. Because it's an exceptionally high-energy piece, there's an unusually high proportion of fast music - and that always takes time, which is daunting. The opera also makes extensive use of electronics and I need to block four or five months to do that. Overall, I'm optimistic: the story is so compelling that it carries us along. Further ahead, I love working on opera that can be presented in intimate theatre spaces - it's the most exciting form of music making. So, like all composers with similar interests - I have lots of ideas for projects. 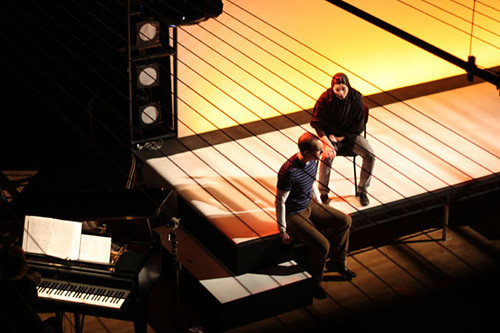 Stephen has enjoyed previous success with the Royal Opera House - in 2004 his opera Clockwork – based on the book by Philip Pullman – was performed at the Linbury Studio Theatre. He was also commissioned to write Gentle Giant, which has been revived twice at the ROH.

Can you tell us about the piece you're preparing for Exposure?

My opera Pedro Páramo (of which two scenes will be seen in Exposure) was workshopped by ROH2 Opera Development for a week last November. The opera is based on the novel by Mexican writer Juan Rulfo which tells the story of Juan Preciado who, as a promise to his mother on her deathbed, returns to Comala to find his father, Pedro Páramo.  He finds a ghost town, but a ghost town populated – he eventually realises - by the dead with whom he can communicate.  Listening to their stories and in a series of flashbacks we piece together the history of the place and learn the terrible truth about who Pedro Páramo really was.

Some of the singers who worked on the opera last November are in the cast for Exposure, and Lindy Tennent–Brown, the Music Director, was also part of that team.

What are the future projects you're involved in?

Future projects include a new work for Rambert Dance (freely adapted form Ravel’s L'Enfant et les Sortilèges), a Suite for the London Philharmonic Orchestra based on my earlier opera, Clockwork (also seen at the Linbury in 2004) - and I have just learnt that the Mexican government is to support further research and development on Pedro Páramo which will enable me to travel to Mexico to visit the places where the opera is set and to work with a Mexican librettist.

You can find out more about Stephen at his website - www.stephenmcneff.co.uk