The political situation in Germany's Weimar Republic contributed to perhaps the most wildly-creative decade in opera's history. 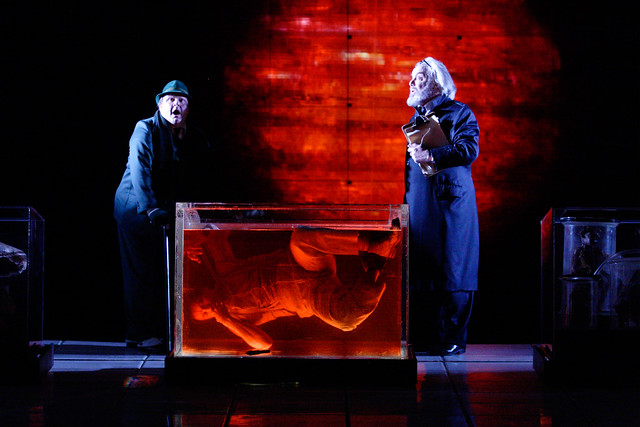 From the end of World War I to the collapse of the Weimar Republic in 1933, German and Austrian composers revitalized opera in striking ways. Bertolt Brecht and Kurt Weill’s 1930 opera Rise and Fall of the City of Mahagonny was one particularly exciting result – but there were many other interesting experiments.

Arnold Schoenberg had explored expressionism in opera as early as 1909, in the 30-minute monodrama Erwartung (‘Expectation’, first performed in 1924). Like expressionist poets and painters before him, Schoenberg abandoned traditional structures to represent his protagonist’s mental turmoil, as she searches for her lover and discovers his corpse. Later expressionist operas were equally anguished, if less musically experimental. Paul Hindemith used a set of variations to portray a nun’s descent into madness in his 1922 work Sancta Susanna, while four years later, Weill used pantomime in his Pagliacci-esque Der Protagonist. By far the most successful expressionist opera though is Alban Berg’s Wozzeck, which also has strong elements of realism, and sets the hero’s mental disintegration against a background of varied strict musical structures.

Neoclassicism – a return to the structures and lighter textures of Classical music – provided relief from expressionism’s emotional turmoil. Weill’s teacher Ferruccio Busoni wrote Doktor Faust in 1925 in response to medieval puppet plays about Faust. This witty, thoughtful meditation on good and evil deftly blends many musical styles, from choral polyphony to Mahlerian romanticism. Hindemith scored his striking 1926 opera Cardillac (loosely based on E.T.A. Hoffmann’s story about a goldsmith who commits murder rather than parting with his work) for chamber orchestra, and used traditional forms such as arias, fugues and passacaglias in a work as musically beautiful as its story is macabre.

German composers of the 1920s became increasingly fascinated by popular music and technology. This led to the development of Zeitoper (literally ‘opera of the time’), which featured contemporary settings, jazz and cabaret music and (often) satirical plots. Max Brand’s Maschinist Hopkins, ‘the first German factory opera’, includes a Sprechstimme chorus of machines and a ‘Black-Bottom’ jazz number. Hindemith’s Neues vom Tage (‘News of the Day’) deals with divorce and includes a scene in which the heroine sings in her bath about the joys of hot water. Weill’s Der Zar lässt sich photographieren (‘The Tsar Has His Photograph Taken’) features a pre-recorded tango and a foxtrot, while his Die Dreigroschenoper (‘The Threepenny Opera’), though not contemporary in setting, draws on jazz and cabaret. Even Schoenberg and Richard Strauss portrayed modern domestic life, in Von heute auf morgen (‘From One Day to the Next’) and Intermezzo respectively. Meanwhile Ernst Krenek brought a hint of fantasy to Zeitoper in Jonny spielt auf (‘Jonny Strikes Up’), in which a jazz violinist steals a violin from a classical virtuoso to herald in the ‘new’ age of jazz. Full of visual spectacle, Jonny features a singing glacier, an onstage car chase and train accident, and a madcap closing foxtrot, led by Jonny astride a globe of the world.

Zeitoper was briefly very popular, but its satirical plots and often caricatured characters proved to have limited appeal. Erich Korngold avoided the genre, preferring psychological dramas and fantasies. His two Symbolist 1920s operas, Die tote Stadt (‘The Dead City’) and Das Wunder der Heliane (‘The Miracle of Heliane’), were inspired by the dream of a bereaved husband and a fairytale-like drama about transcendent love respectively. Strauss (Intermezzo aside) also avoided operas on contemporary subjects, taking inspiration from Greek myths in the luscious Die ägyptische Helena (‘The Egyptian Helen’, 1928) and from 1860s Viennese society in Arabella (1933).

Mahagonny is now one of the most acclaimed works of the Weimar period, perhaps because – like Berg’s Lulu – it is difficult to limit it to any one genre. Brecht and Weill may have satirized opera, but they also celebrated it, offering the listener a dizzying array of musical styles, including romantic lyricism, neoclassicism, symphonic expressionism, jazz and popular song. It was a remarkable climax to the many intriguing operatic experiments carried out in Germany’s Weimar Republic.