'Exit, pursued by a bear': How do you approach Shakespeare's famous stage direction?

Directors of The Winter's Tale have tried the literal and conceptual, including real bears. 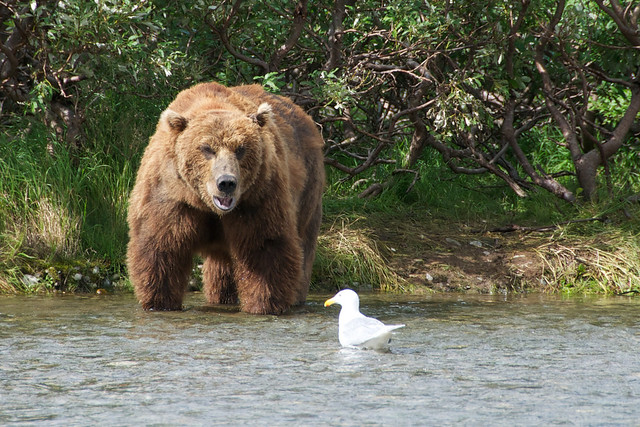 In 2009, reports surfaced in the press that a bear had been spotted in Suffolk. Videos appeared online, the police were notified and walkers were warned to be on their guard.

‘I saw it moving through the trees ahead’, said one witness. ‘It was much bigger than a dog. I picked up my son and left for the car straight away.’

But the story was a hoax: there was no bear. The videos had been created by a theatre company to draw attention to their upcoming production of The Winter’s Tale.

It’s not often that a play is best known for one stage direction. But then not many stage directions are as memorable as the one that appears in Act III of Shakespeare’s The Winter’s Tale: ‘Exit, pursued by a bear.’

The character being pursued is Antigonus, a lord of Sicilia, who has been ordered to abandon the baby Princess Perdita . He is interrupted in his cruel errand by the arrival of the bear, an encounter that proves fatal for him – but not for the baby.

Frustratingly, 17th-century accounts of early stagings of the play make no mention of the bear’s appearance. It’s not impossible that a real bear was used at the premiere. The Globe Theatre was, after all, not far from the city’s bear-baiting pits. But, as Shakespeare scholars Susan Snyder and Deborah T. Curren-Aquino have pointed out, these bears were far from tame: ‘even less likely is a bear trained to the point where it could be trusted to wait backstage, enter on cue, and rush at Antigonus without mauling him.’

Another theory has gained credence in the last few years. In 1609 (around the time the play was written) King James I was given two polar bear cubs that had been captured on a voyage to the Arctic. One of these cubs could well have featured in the premiere – a bear cub would have been much less dangerous than a full-grown animal, and would surely have been a hit with audiences.

For a multitude of very sensible reasons, real bears are now unlikely to be used in productions of The Winter’s Tale. Representations of the bear have generally fallen into two types: realistic (an actor in a bear suit) and more conceptual.

On the realistic side, Charles Kean’s bear in his 1856 production was praised in The Times as ‘a masterpiece of the zoological art’. An early 20th-century production by Harley Granville-Barker and a 1951 staging by Peter Brook were both praised for having convincingly ferocious bears.

But the problem with the bear-suit approach is that the scene can often end up being funny – and this direction is about a man being mauled to death. That essential mismatch has led directors to search for less ‘pantomime’ ways of staging the scene.

Conceptual versions of the stage direction have included a shadow of a bear seen in a flash of lightning (director Ronald Eyre, 1981), a bear evoked by a screech and a growl (James Lapine, 1989) and, in Greg Doran’s 1999 production for the Royal Shakespeare Company, the fallen canopy of the Sicilian palace morphed into the shape of a bear. In a 1986 production by Terry Hands a polar bear rug reared up to chase off the terrified Antigonus.