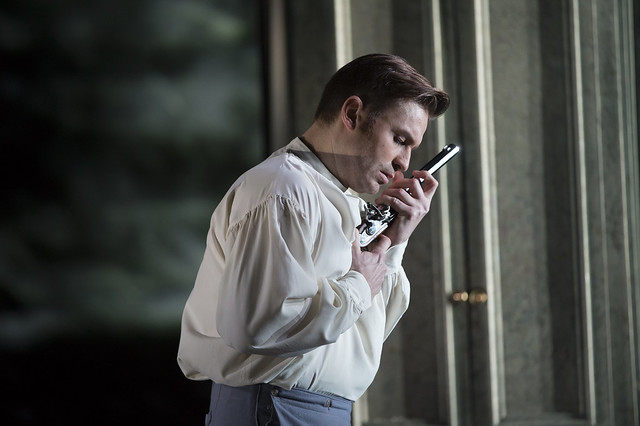 The curtain rises on a frozen landscape at dawn. A lone figure is waiting for his closest friend, whom the previous night he challenged to a duel. This is the landowner and poet Vladimir Lensky, and, as he sits waiting for Eugene Onegin, he meditates on what will happen to him, with a premonition of his death.

Tchaikovsky’s 1879 opera Eugene Onegin, based on the Pushkin novel in verse of the same name, is the story of Tatyana Larina, and the tragic outcome of her love for the dashing but emotionally immature Eugene Onegin. Tatyana is not the only one to suffer the effects of Onegin’s carelessness. Having rejected Tatyana, Onegin flirts with her sister Olga – the fiancée of his best friend Lensky – and is challenged by the furious Lensky to fight a duel. He kills Lensky, just as he earlier destroyed Tatyana’s hopes.

Alone, waiting for the duel to begin, Lensky asks where his youth has gone. Pliant strings accompany his appeal for sympathy while a descending line introduces the aria proper. The main theme is immediately familiar from an earlier, less angular, version that accompanied Tatyana’s declaration of love for Onegin in the Letter Scene at the end of the second scene. Here, however, the theme has a cruel chromatic sting in its tail - hope is futile.

This musical parallel in the two arias confirms an underlying kinship between Tatyana and Lensky. Furthermore, both arias are implicitly addressed to Onegin: Tatyana’s letter scene is founded on misplaced hopes, while Lensky’s farewell to life is tinged with regret. Both Tatyana and Lensky are dreamers – one lost in the romantic world of novels, the other an aspiring poet – and they suffer because of it.

As Lensky questions what lies ahead, Tchaikovsky uses an ascending and descending melodic line both in the voice and the woodwind, much as he does in the equally fatalistic Swan Lake (completed shortly before Eugene Onegin). Lensky’s future is unclear and the overlapping woodwind solos that snake around his vocal line illustrate this. The effect is increasingly claustrophobic.

A middle section moves away into the relative key of G major. But such sunny music is cruelly short-lived; the melody’s punishing chromatic twist is repeated and we are soon back in E minor. A dialogue between an oboe and clarinet recalls Olga and Lensky’s past happiness. Such memories inspire a more dramatic reprise of the opening melody, with the accompanying woodwind lines becoming ever more elaborate.

The cruellest illusion, however, is yet to come. Lensky calls for Olga to come to him and declares his intention to marry her. Tchaikovsky shifts into distant key of A flat major and Lensky’s vocal line takes on a heroic style; briefly, he is the model of a daring lover. But that tonal disparity merely underlines the impossibility of such a resolution and, as soon as Tchaikovsky has established his ‘false’ key, the music shifts back into E minor. Lensky repeats the opening question of the aria, the violins and a lone horn respond and Onegin arrives for the duel.

The production is a co-production with Teatro Regio di Torino and Opera Australia, and is given with generous philanthropic support from the Danish Research Foundation.