Emeralds, Rubies and Diamonds: Adding the sparkle to The Royal Ballet's Jewels

With George Balanchine's celebration of gems returning, a glimpse into the ROH Costume Department. 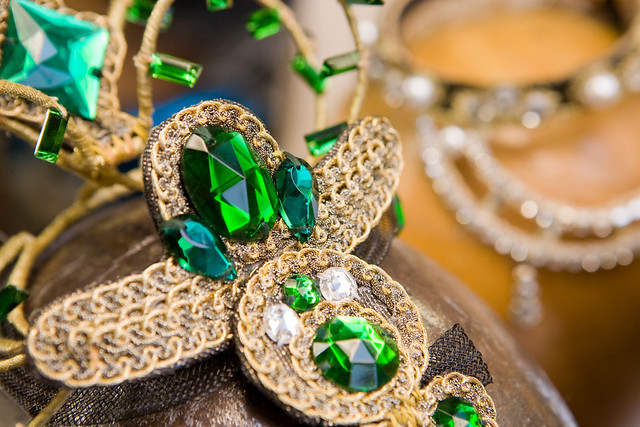 Why does the Royal Opera House stage so often glitter with costume jewellery? The answer surely lies in the courtly origin of opera and ballet. Art forms that once boasted Louis XIV as a participant are bound to flash the odd rock. The result is a huge collection of crowns, coronets, tiaras, bracelets, necklaces and jewelled poison bottles – a tradition celebrated in Balanchine's sumptuous Jewels.

In La Bayadère the Rajah is dripping with jewels and pearls, the entire corps is crowned with diamond headdresses, and Gamzatti tears off a fantastic necklace in her attempt to bribe the heroine. Watching it being flung across the stage prompts an obvious question to Janet Steiner, Head of Hats and Jewellery at the Royal Opera House: how does the necklace come off so easily? ‘A tiny piece of Velcro!’, she replies.

Janet is usually more anxious to ensure that jewellery doesn’t suddenly leave its owner. All the tiaras and headdresses (including the little jewelled crowns in Jewels) are mounted on small strips of mesh, called ‘crin’. The wig department pin the crin on to the wigs before the show and it holds extremely well (as indeed it has to, when you consider how often a prima ballerina is held upside down). Nothing is supposed to bounce about – or clatter. ‘We can fix the stones together or put in a bit of glue to keep them from moving but, if it makes too much noise, we just take the clattery bit off.’ Strung necklaces are given double knots between each bead before they’re allowed on stage. ‘Then if it breaks, somebody can just pick it up and run off with it. If you don’t knot it properly the beads would scatter all over the stage and we’d have an accident.’

Practically any decoration worn below the bust line is applied by somebody from the costume department. Catriona Paterson, Head of Women's Costume Workroom, explained:

'It’s all about partnering. We want to make sure that when the girl is lifted, nothing on her body is going to catch anyone’s finger. If the designer has come up with a sequined fabric, we unpick the sequins from the areas where the girl will be held and replace them with nice flat iron-on ones. And in ballets like Sleeping Beauty we use Swarovski Hot-Stones. They look like jewels, but they’re completely flat and non-lethal: we just iron them on to the bodice.'

It’s noticeable how non-essential (in plot terms) jewels tend to be in ballet. Apart from the odd necklace, like the one Bathilde gives Giselle, or Cinderella’s glittering pointe shoe, dance jewellery often does nothing to advance the story – it’s there to be worn.

Where does all this fake jewellery come from? Surprisingly, not from London. ‘We shop all over the world really’, says Janet, 'Coloured stones have become very difficult to get in England. The bead shops sell a lot of "diamonds" but none of the colours. We buy from Swarovski, another company in Austria and a couple of American ones. It all depends what shaped stones we are after; for Jewels we needed rectangles. You just can’t get that shape in the UK.'

So nothing on stage is British? ‘Yes it is! If something’s set in the Orient we go straight to Southall!’

The full article by Sarah Lenton is in the Jewels programme book. It is available in the theatre at performance times and from the ROH Shop.