The Royal Ballet Principal on MacMillan’s dark tale of sex and violence. 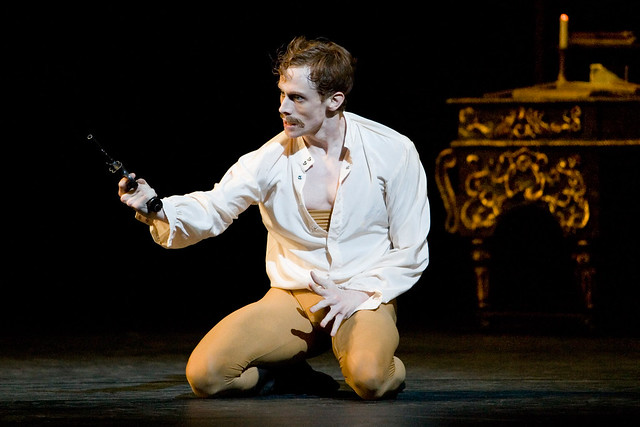 Royal Ballet Principal Edward Watson, praised for his dramatic roles, is busy preparing the part of Crown Prince Rudolf in Kenneth MacMillan’s Mayerling. Given the rapturous reception he received in the role last time around (the Telegraph described him as ‘an extraordinary interpreter’), it’s quite a surprise to learn that he has danced it only six times before.

‘It’s funny to be known for something I’ve done so little,’ he says. It’s also testimony, though, to the impact he has made by pushing its visceral qualities to the limits – especially as it is probably the most substantial and extreme ballet that any male dancer can tackle.

Among the company’s full-length masterpieces, this ballet is unique in being inspired by an historical incident: the suicide pact between the increasingly deranged and violent Crown Prince Rudolf, heir to the Habsburg Empire, and his 17-year-old mistress, Mary Vetsera, at the Mayerling hunting lodge near Vienna. This horrific event sparked the downfall of the dynasty.

‘It’s a fascinating story,’ Watson says. ‘It sounds like a movie, but when you know it’s real it draws you in to find out more. You can look into all kinds of matters: Austria being so buttoned up, all those cover-ups, and Marie Larisch [Rudolf’s ex-mistress and a vital character in the ballet] writing a memoir so that she wouldn’t be implicated.’ It was Larisch who introduced Mary to Rudolf.

‘But it’s all there in the choreography. For me it’s about rehearsing carefully and making moments say what they’re supposed to say. It’s always a joy in rehearsing that ballet that you find something new all the time. A movement that looks ordinary, like an arabesque, can mean hundreds of different things, depending on the way you do it.

The role’s challenges are enormous, both physically and dramatically: ‘In the first act alone there’s a huge number of pas de deux, as well as group scenes and solos. And conveying Rudolf’s personality, being that tense, that wired and often aggressive, is a real demand. Half way through you’re thinking, “Oh God, I never want to do this again, it’s so hard”. But by the end you’re thinking, “I never want to do anything else!”’

The story’s violence is far removed from a classical dancer’s usual world of control and streamlined beauty: ‘It’s great!’ Watson laughs. ‘Getting out of that kind of tense, upward, symmetrical thing. It’s a gift to let go and it’s what everyone’s screaming out to do. At least, I am...’

‘Kenneth MacMillan proved that you can tell those kind of stories in ballet,’ he adds. ‘When Mayerling was first done, perhaps people weren’t ready for it, but now I think that that kind of theatricality has become as British as Frederick Ashton is. Certainly for my generation, it’s what excites us.’ At 36, Watson is too young to have worked with MacMillan – but he is godfather to the choreographer’s small grandson.

Rudolf remains, astonishingly, one of only two balletic princes he has ever danced (the other is Albrecht in Giselle, who’s more dramatic than most). Not for him, he says, ‘a prince who kisses a princess to wake her up, or falls in love with a swan. They’ve never come my way. There are people who do that brilliantly, and as long as I can do the stuff I’m good at, then I don’t mind.’ And as long as he dances Mayerling, his fans will be more than happy.