Drawing on our history: how sketches bring The Royal Opera’s past to life 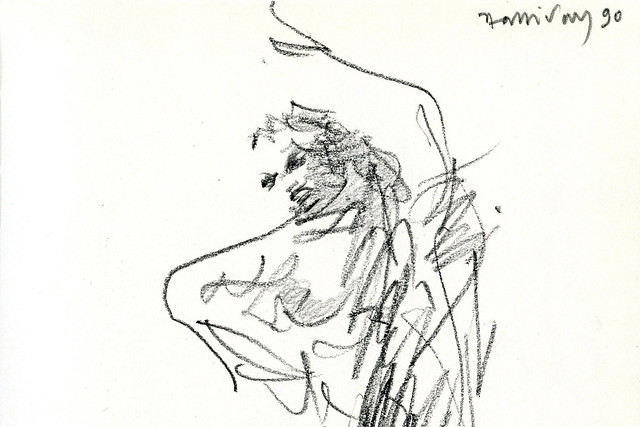 ROH Collections works to preserve the history of the Royal Opera House by collecting and storing items that document the life of the building. Many of our precious items come from generous donations, and in December 2016 we received a remarkable offer from an artist with a long and unusual history with the Royal Opera House.

Painter Alan Halliday worked front of house in the 1970s, while a student at the nearby Courtauld Institute of Art. In Halliday’s own words, the experience ‘enabled me to see night after night some of the greatest singers, dancers and productions the Royal Opera House has ever presented – Nureyev, Fonteyn, Boris Christoff, Geraint Evans, Domingo, Pavarotti, Sibley and Dowell…’. He also gained ‘a detailed, first-hand knowledge of the Royal Opera House and how it worked’.

In 1979, now working as a professional artist, Halliday returned to Covent Garden and made drawings of members of The Royal Ballet from the standing area at the back of the Stalls Circle. On seeing his portfolio, the ROH’s General Director John Tooley and The Royal Ballet’s Founder Choreographer Frederick Ashton invited Halliday to draw at general rehearsals (the last rehearsal before opening night). Halliday went on to sketch both The Royal Opera and The Royal Ballet for the next 25 years.

Elektra in despair. Page 8 of Alan Halliday's sketchbook of the general rehearsal of Elektra, The Royal Opera, 1990 © ROH Collections

Robert Tear as Aegisthus. Page 21 of Alan Halliday's sketchbook of the general rehearsal of Elektra, The Royal Opera, 1990 © ROH Collections

The sketchbook donated to ROH Collections contains sketches made in 1990 at the general rehearsal of Götz Friedrich’s new production of Richard Strauss’s opera Elektra. The sketches were made during the rehearsal and run chronologically through the performance. It was offered to ROH Collections on behalf of Halliday by Stephen Camburn of the Camburn Fine Art Gallery in the south of France, which specializes in Halliday’s paintings.

The sketchbook begins with a portrait of conductor Georg Solti, arms outstretched. We then move to the performers on stage: Eva Marton as the suffering, furious Elektra; Nadine Secunde as her beautiful sister Chrysothemis; Robert Hale as their brother Orest, thought to be long lost; Marjana Lipovšek as their sickly mother Klytemnästra and Robert Tear as her lover Aegisth.

Above some of the images Halliday supplies text that ties the drawing to a specific line from the opera. In ‘Orest ist tot!’ (Orest is dead) the despairing Elektra clasps her hand to her mouth; and in ‘Was willst du, fremder Mensch?’ (What do you want, stranger?) the returned Orest, unrecognized by his sisters, is half submerged in darkness.The sketchbook closes with powerful images of Elektra’s final dance to her death. 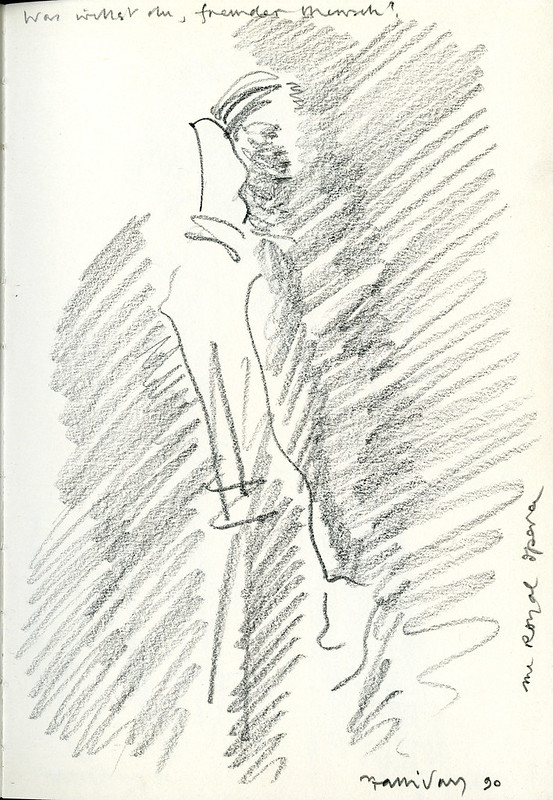 The sketchbook is a beautiful item in its own right. But it also makes a valuable addition to the ROH archive, adding detail and a unique perspective to our records of this production of Elektra.

Find out more about the work of ROH Collections.