The great seducer's tongue-twisting Act I aria reveals his irrepressible energy and love of life. 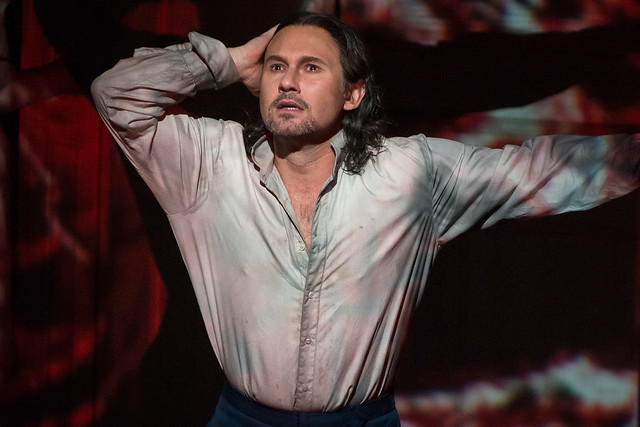 Don Giovanni is a man of action. He rarely pauses for thought – and Mozart writes music to match. Unlike his fellow aristocrats Don Ottavio, Donna Anna and Donna Elvira, he has no introspective aria. His two Act II arias are directed at someone else: the serenade ‘Deh vieni alla finestra’, sung to seduce Elvira’s maid; and ‘Meta di voi qua vadano’, where – in disguise as Leporello – he cunningly misleads Masetto so that he himself can escape. Giovanni’s one attempt at self-expression is the Act I aria ‘Finch’han dal vino’ (known as the Champagne Aria for the tradition of having Giovanni swig champagne before singing and throw away the glass at the end). Characteristically, the aria is in no way reflective – but it is still revelatory.

By the time Giovanni sings the Champagne Aria his life has become inordinately complicated. His abandoned lover Elvira has foiled his attempts to seduce the peasant girl Zerlina and has revealed his true character to Anna and Ottavio. Anna (unknown to Giovanni) has recognized him as her father’s murderer, and has vowed vengeance. Zerlina’s furious husband Masetto is also out to get him. Despite all this, Giovanni remains sanguine – if anything, he seems to thrive on chaos, and in the recitative that precedes the aria banters jovially with Leporello. He declares that he will devote the rest of the day to pleasure and host a grand party.

‘Finch’han dal vino’ (one of Mozart’s shortest arias, at just under two minutes) is a perfect expression of Don Giovanni’s manic excitement. The key is a gleaming B flat major, the tempo a breathless Presto. The accompaniment of fleet strings and woodwind, the constant momentum and the tongue-twisting vocal line create an ebullient, almost delirious atmosphere. Don Giovanni rattles off instructions to Leporello at top speed: he must prepare a great feast, with enough wine to make everyone drunk, he must find more girls to attend and he must organize dancing.

Giovanni orders that at his feast dances will be performed ‘in no order’: some will dance the noble minuet, others the peasant alemanna and others the follia or contredanse, a dance for the middle-classes. (Mozart has a musical joke in the following party scene, where he obeys Giovanni’s orders to the letter: onstage musicians perform the three dances, each in a different metre, simultaneously – a truly ingenious feat). Giovanni himself, always the social rebel, seems to identify with the vigorous contredanse rather than the stately minuet: the Champagne Aria is a contredanse, and Giovanni will later dance it with Zerlina.

The irrepressible energy of the Champagne Aria reflects Giovanni’s vitality, while Giovanni’s emphatic orders to perform dances ‘without order’ reveals his delight in anarchy. His threefold repetition of the phrase ‘vo’ amoreggiar’ (I will make love) conveys his thrill at the thought of passion and of new names to add to his long catalogue of conquests – he also repeats again and again the aria’s final phrase ‘Ah, la mia lista doman’ mattina d’una decina devi aumentar!’ (Ah! Tomorrow morning you will have ten names to add to my list!). Finally, the tradition of having Don Giovanni laugh exuberantly during the closing orchestral statement of the melody gives a sense of his self-destructive joie de vivre.

Giovanni is not an admirable man: he is a murderer, an opportunist, and a liar. But Mozart’s music – particularly in this aria – makes it impossible for us to dislike him and cements him as one of all theatre's great antiheroes. Whatever else you think of him, Giovanni is endowed with an enormous appetite for life and a great capacity for pleasure: both very seductive characteristics.

The production is a co-production with Houston Grand Opera and is given with generous philanthropic support from The Danish Research Foundation.