Nemorino goes to Dr Dulcamara to get an elixir of love, but modern psychology might have some more reliable methods. 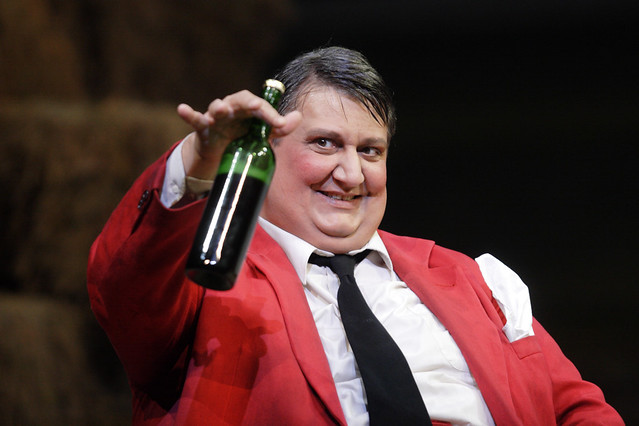 Most people have a positive view of themselves. Donizetti’s Sergeant Belcore is a case in point – he is self-important and wastes no time in courting Adina in front of everyone. However, a significant minority of people do not have such positive views of themselves.

In L’elisir d’amore, Nemorino – who is not especially bright or well off – is in love with a beautiful and rich farm owner, Adina. His feelings are understandable, as evidence suggests people tend to be attracted to those who represent who they would like to be (their ‘ideal self’) rather than those who are similar to them. There is also evidence that falling for someone who represents a desired ideal can help to boost self-esteem – it signals a desire for self-improvement and could help someone to believe that they are more similar to the loved one than originally thought. There’s also the (outside) chance that feelings might be reciprocated!

Unfortunately, upward social comparisons can – at times – also be devastating. Someone with high self-esteem might manage to reconcile such differences, perhaps by thinking that Adina has been lucky, and that their own shortcomings are trivial and easily overcome. However, Nemorino doubts himself and is hurt by Adina’s apparent interest in Sergeant Belcore. One way in which people with low self-esteem deal with an unfavourable comparison is to distance themselves from that person, either physically or psychologically. While such a response may help to reduce painful emotions, it is hardly likely to help Nemorino win Adina’s affections.

Instead, Nemorino’s solution is to solicit the help of a quack doctor who sells him an ‘elixir of love’ – actually half a bottle of red wine. It’s a plot that has been hijacked by tacky T-shirt sellers across the world (‘Beer – helping ugly people have sex since 1862’). But what advice might you give to Nemorino if he came to see you and you did not have a love potion (or a bottle of Bordeaux or Budweiser) to hand? Here are a few ideas:

Exercise: Many studies report a strong relationship between levels of physical activity and self-esteem. However, doing more exercise is not a ‘quick fix’. With Adina promising to marry Sergeant Belcore within just a few hours, there may not be time for exercise to work its magic.

Deodorant: An interesting study suggests that wearing an anti-perspirant deodorant made men feel more confident and led women to rate them as more attractive. Perhaps if L’elisir d’amore had been written in more modern times then Nemorino might have been given a can of body spray.

Self-compassion: People are often their own harshest critics, setting optimistic goals and then beating themselves up when their actions fall short. Self-compassion involves trying to be kind and understanding in the face of apparent inadequacy. Nemorino might be invited to ‘cut himself some slack’ and to accept his limitations in a non-judgemental way, which recognizes that to fail is to be human.

Scientific research therefore offers an alternative to pseudo-love potions and suggests that it is possible to increase self-confidence without damaging one’s liver. But is a more confident Nemorino any more likely to get the girl? Are self-confident people more attractive?

The short answer is ‘yes’. Studies have found that, while men primarily valued physical attractiveness, women preferred mates who were higher in income, education, self-confidence, intelligence, dominance and social position than themselves. These findings fit with an evolutionary perspective, and also explain why the village girls suddenly become interested in Nemorino when they discover that his rich uncle has died and left him a fortune. However, it is useful to know that self-confidence – something that is a little more amenable to change than, for example, intelligence – is on women’s list of requirements. Perhaps there is hope for Nemorino yet…

This is an extract from Thomas L. Webb's article 'An Alternative to Love Potions' in The Royal Opera's programme book, available during performances and from the ROH Shop.