From Mozart to Miley Cyrus, Es Devlin discusses the breadth of her set design. 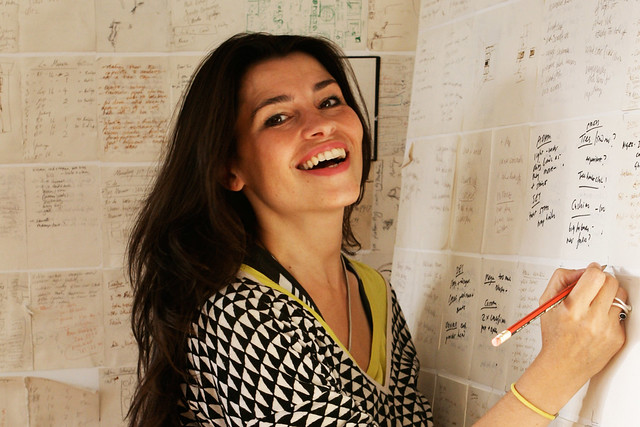 She was interviewed by Kirsty Lang at her studio in South East London - a former factory packed with leftovers from past productions and models for forthcoming shows - where she introduced the initial designs for a future Royal Opera production.

‘This is a 1:25 scale model of the initial design for the first Royal Opera production of Bertolt Brecht and Kurt Weill’s opera The Rise and Fall of the City of Mahagonny,’ she explained.

The production will open with The Royal Opera in March 2015. In preparation, she and her team have already broken down the piece minute by minute. ‘We know exactly what is happening every minute of the piece - who is singing, how many voices there are, the combination of voices, and how many people are on stage.’

Recently, Es has been working with Kasper Holten on his new production of Don Giovanni. Watch Kasper's video diary series about staging the new work.

She spoke about the connection between her work with pop acts and the opera, explaining: 'For Don Giovanni, we’re using an extraordinary animator called Luke Halls, who I’ve worked with on Lady Gaga and Take That, and he is creating something for The Royal Opera that, I think, hasn’t been seen before.'

Es has gone from designing for fringe venues of just 80 people to designing for arenas for up to 80,000, and moves effortlessly between concerts, theatre and opera. Her credits range from the 2012 Olympic Ceremony, to the award-winning Chimerica; from Les Troyens to the much-anticipated musical American Psycho.

Have you seen plays, operas or concerts designed by Es Devlin? Let us know what you think of her work.

Don Giovanni runs from 1-24 February 2014. Tickets are still available. Other Royal Opera production designed by Es Devlin include Salome and and Glass’s Orphée. Watch an interview with Es about designing the set for Les Troyens.

This article has been categorised Opera and tagged BBC Radio 4, by Kasper Holten, don giovanni, Es Devlin, Front Row, Production, Radio 4, set design, The Rise and Fall of the City of Mahagonny, The Royal Opera