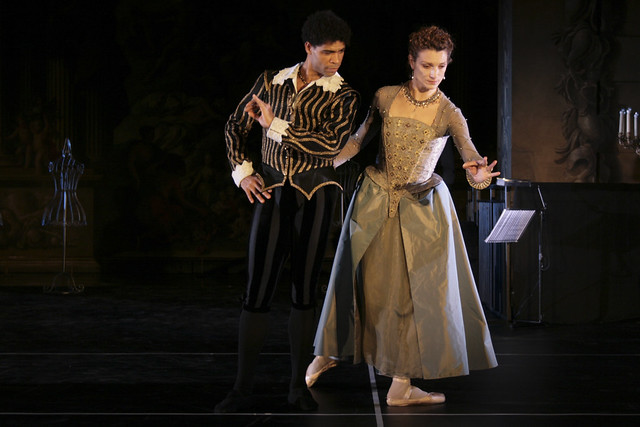 Will Tuckett’s dance theatre work Elizabeth follows in a long line of works fascinated by the life, loves and desires of Queen Elizabeth I. She remains one of the most significant monarchs in England’s history. As Tuckett describes, ‘her reign was extraordinary for creating a lasting, if complex, balance between crown, church and parliament’, as well as for fostering a cultural golden age. But Tuckett, like others before him, is intrigued as much by Elizabeth’s private passions as by her political triumphs. For Tuckett, ‘Her strength of character politically and in matters of court, combined with her weakness for men that treated her badly, creates a turbulent emotional picture’.

A Portrait in Dance

Elizabeth I carefully managed contemporary public opinion through portraits of herself – and many of these paintings are still familiar today. But as Tuckett explains, these painted portraits ‘do nothing to describe her physicality and dynamic’, nor ‘her love of dance, the arts and her quick-witted, wicked sense of humour – all evident in her own writing’. Taking writings by Elizabeth and those around her as a starting point, Tuckett ‘began to wonder how this woman moved, how she behaved physically. I felt that dance could provide another take on how this extraordinary woman could be viewed’.

Poet and librettist Alasdair Middleton compiled the texts that are spoken and sung in Elizabeth almost entirely from ‘what Elizabeth wrote or said about herself, Robert Dudley, the Duc D’Anjou, Sir Walter Raleigh and Robert Devereux; or what her contemporaries wrote and said about her and them’. Middleton used supplementary material from plays of the period – the most recent of which, John Banks’s 1682 The Unhappy Favourite or The Earl of Essex – is the only text Middleton uses that was not written by a direct contemporary of Elizabeth.

Conductor and composer Martin Yates set out with two main aims in his score for Elizabeth: to create a soundscape that would evoke, without parody, the great music of the Tudor period; and to celebrate the musical legacy of Elizabeth’s cultural golden age, hand in hand with its dance and literature. Yates took the music of both famous and less well known Tudor composers and ‘“borrowed” the structures of various pieces and songs… I then proceeded to write what I can only describe as a set of variations’. The result is music that looks back to the past and provides a valuable context for Tuckett’s choreography, and which also has ‘a voice of its own’.

Elizabeth was created in 2013 for a gala performance at the Old Royal Naval College’s Painted Hall in Greenwich, birthplace of its illustrious subject. It is revived now in 2016 as the Royal Opera House’s first contribution to the worldwide celebrations of Shakespeare’s 400th anniversary, a tribute to the political and cultural atmosphere that gave rise to Shakespeare’s genius. Elizabeth is the final show in the Linbury Studio Theatre before it closes for extensive renovation as part of the Open Up project – again highly suitable, given the many works Tuckett has created over the Linbury’s history. And finally, last but certainly not least, this run of Elizabeth marks the final time Carlos Acosta will perform with The Royal Ballet as Principal Guest Artist, as he retires from ballet at the end of the Season.

Elizabeth runs 8–17 January 2016. Tickets are sold out, but returns may become available.

The production is being supported by the J P Jacobs Charitable Trust.

Elizabeth is part of the SHAKESPEARE400 celebrations, coordinated by the London Shakespeare Centre and Culture at King’s College London.