Our quick introduction to this fabulous hip-hop take on favourite characters from Alice’s Adventures in Wonderland, remixed for the unique space of the Roundhouse. 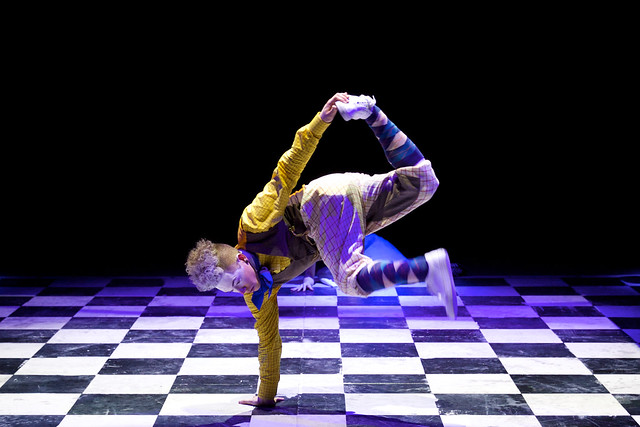 Young psychotherapist Ernest is an expert in being ‘normal’ – he even has a PhD in normalization. He’s just begun his first job, at the prestigious (if rather gloomy) Institute for Extremely Normal Behaviour. It’s immediately clear his patients need his help: the March Hare, the Mad Hatter, Tweedledum and Tweedledee and the furious Queen of Hearts are all a long, long way from being ‘normal’. But as he struggles to bring normality to his Wonderland ward, Ernest begins to ask himself: what’s so great about being ‘normal’?

Kate Prince founded ZooNation Dance Company in 2002 and the company has since soared to national and international fame, acclaimed for bringing hip-hop dance to new audiences. A watershed moment came in 2006 with the company’s first full-length narrative work, Into the Hoods – which went on to become the longest-running dance show in West End history. The Mad Hatter’s Tea Party is ZooNation’s fourth narrative work, and was commissioned by The Royal Ballet in 2014 to complement performances of Christopher Wheeldon’s Alice’s Adventures in Wonderland – uniting what might seem the disparate art forms of ballet and hip-hop under one tradition of excellent storytelling through dance. After that sell-out run, ZooNation now reimagines their show for the Roundhouse.

ZooNation works are immense collaborative processes, with the Mad Hatter creative team including not only musicians DJ Walde and Josh Cohen, designer Ben Stones and lighting designer Andy Murrell, but the entire company, with every dancer playing an instrumental role in the choreography and expression of their character. But the whole is guided by Kate Prince’s vision, and it’s she who shapes these individual creative outputs to craft the engaging, moving and often hilarious stories for which ZooNation is so famed. Her starting point with The Mad Hatter’s Tea Party was to re-read Lewis Carroll’s books, encountering again Carroll’s large cast of decidedly odd characters. Prince found herself wondering: who are these people, and how did they get to be the way they are? Out of this seed has grown an inspired, character-driven take on these iconic tales, nurtured by the full force of the ZooNation Dance Company.

The Mad Hatter’s Tea Party has changed on its reincarnation at the Roundhouse. The venue’s distinctive cylindrical space has entailed a transformation to the show as a whole, to make the most of this immersive setting. DJ Walde and Cohen have written five new songs, with lyrics written in conjunction with Prince. The new songs both add to the wonderfully eclectic soundtrack – which ingeniously incorporates funk, pop, reggae, blues, gospel and much more besides – and create new opportunities to explore the characters further, particularly the Mad Hatter and the March Hare. And of the original cast, three dancers are returning – Tommy Franzén as Ernest, Turbo as the Mad Hatter and Teneisha Bonner as the Queen of Hearts – but the other performers are new to the piece, and each brings their own individuality to Prince’s characters.

Supporting the next generation

ZooNation has a dual goal: to bring hip-hop dance to new audiences, and to train the next generation of hip-hop dancers. These missions are two sides of the same coin, and come gratifyingly together in the Roundhouse revival of The Mad Hatter’s Tea Party. One dancer, Jaih Betote, first encountered ZooNation at the age of 12. He joined the ZooNation Academy of Dance and graduated into the ZooNation Youth Company, and now makes his debut with the adult company. Another dancer, Michael Ureta, has a similar story, and cites an eye-opening visit to see Into the Hoods as a key inspiration to becoming a professional dancer. These sorts of stories make the Roundhouse even more ideal as a venue, with its equal commitment to showcasing the best of the moment and nurturing the artists of the future. As Prince says, ‘Our younger dancers, who’ve been inspired to get into dance by watching ZooNation, are such good examples – not just of the power of music and dance to inspire, but, in the context of this show particularly, how healing those art forms can be’.