Crossed wires and ‘too many deaths’: The troubled genesis of Verdi’s Il trovatore

How Verdi's operatic smash hit came to being — in spite of a tangled web of correspondence between composer and librettist.

By Flora Willson (Lecturer in Music at King's College London) 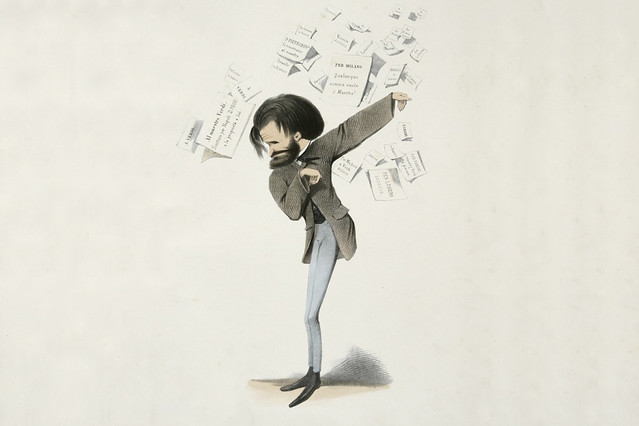 Giuseppe Verdi’s middle-period smash hit Il trovatore has often served as public enemy number one in the case against opera’s supposedly absurd plots. From Gilbert and Sullivan to the Marx Brothers, Il trovatore is the butt of jokes at opera’s expense – a status rivalled only by its popularity. Wildly acclaimed by mid-19th-century audiences, Il trovatore clung on with rare tenacity through the Wagner-obsessed decades of the early 20th century and is today one of the most regularly staged pieces in the repertory.

But if Il trovatore’s action is famous for its dramatic swerves, the story of its genesis inevitably has its own twists and turns. Combining tragedy with a dash of PG-rated farce, the opera’s emergence was driven by the ever-impatient Verdi, whose chidings, enthusiasms, demands for assistance and occasional words of encouragement can be traced through his lengthy correspondence. Verdi’s primary and most influential interlocutor was his librettist Salvadore Cammarano – who excelled at librettos produced in a relatively conservative vein, crafting conventional operatic forms from the most aberrant literary sources.

The Spanish play El trovador by Antonio García Gutiérrez – unwieldy by any measure – first seems to have attracted Verdi’s interest as he neared completion of Rigoletto, late in 1850. Verdi suggested the subject to Cammarano at the start of January 1851, but two months later still hadn’t had a response. After another, blunter prompt, Cammarano finally replied with a list of concerns about the play. Although the correspondence gathers momentum from this point, it also becomes tangled: letters inevitably took some time to arrive and several crossed paths as they sped between composer and librettist – a common occurrence in those days but one exacerbated by Verdi’s chronic impatience.

His constant reminders to Cammarano of the extreme urgency of receiving the libretto are unusual even for Verdi. They point to a composer under considerable strain – the rising clamour of requests for new operas from theatres across Europe a permanent accompaniment to new domestic problems – as well as one particularly inspired. Verdi’s desire for rapid progress would nevertheless soon meet a serious obstacle: Cammarano seems to have become seriously ill during the winter of 1851.

Still hopeful, Verdi confirmed to Cammarano at the start of the following July that their new opera would have its premiere in Rome. A week later, Cammarano sent Verdi a letter containing ‘il resto del Trovatore’, which Verdi acknowledged with evident delight. But Cammarano would never read Verdi’s grateful letter: he died on 17 July 1852, two days before the composer wrote to him. A fortnight later, the news reached Verdi, who wrote to his friend Cesare de Sanctis:

I simply can’t tell you how upset I am! And I read of his death not in a friend’s letter, but in a stupid theatrical journal. You loved him as I did and will understand what I can’t put into words. Poor Cammarano! What a loss."

In Cammarano’s absence a young poet, Leone Emmanuele Bardare, was recruited to assist Verdi with necessary tweaks to the opera’s libretto. Il trovatore had its premiere at Rome’s Teatro Apollo almost exactly six months after Cammarano’s death, on 19 January 1853. The audience response was hugely enthusiastic. The composer took a cautious view of the work’s early reception, reporting to his friend Clara Maffei ten days later, ‘They say this opera is too sad, and that there are too many deaths in it. But after all, everything in life is death! What else is there?’

It is hard not to read between such lines to see Verdi’s ongoing grief over Cammarano’s death. But while Il trovatore emerged in unusual proximity to death and those deaths it stages occur at an almost brutal pace, what remains for many – and what has driven its popularity since its premiere – is rather the opera’s extraordinary momentum: less its rapid, fatal dénouement than its constant musical vitality.

This is an edited extract from Flora Willson’s article ‘Crossed Wires and “Too Many Deaths”', available to read in full in The Royal Opera’s programme book for Il trovatore, on sale during performances.

The production is a co-production with Frankfurt Opera and is given with generous philanthropic support from the Royal Opera House Endowment Fund.

By Flora Willson (Lecturer in Music at King's College London)