Creating a Classic: How Kenneth MacMillan created Romeo and Juliet

MacMillan made ballet history with his first full-length ballet.

Lynn Seymour as Juliet and Christopher Gable as Romeo in Romeo and Juliet. © 1965 Roy Round

When the Bolshoi Ballet first brought Leonid Lavrovsky’s Romeo and Juliet to the Royal Opera House in 1956, British audiences were astounded by the ballet’s power and the might of the company that performed it. Ninette de Valois decided that her Company should have a full-length Romeo and Juliet in its repertory. Shakespeare was, after all, Britain’s greatest playwright, and the 400th anniversary of his birth would be celebrated nationwide in 1964.

De Valois set negotiations in train with the Soviet authorities to enable Lavrovsky to mount his production for The Royal Ballet. When it became clear that these negotiations weren't bearing fruit, she tried to persuade Frederick Ashton to stage the Romeo and Juliet he had choreographed for the Royal Danish Ballet in 1955. He demurred about remounting it in London for fear of comparison with the massive Russian production.

So Kenneth MacMillan was given the chance to create his first three-act ballet – with less than five months to deliver it. He had already been thinking about how he would approach creating his own Romeo and Juliet to Prokofiev’s music. When Lynn Seymour requested a lyrical duet for her to perform on Canadian television in September, with Christopher Gable as her partner, MacMillan swiftly choreographed the balcony scene pas de deux. 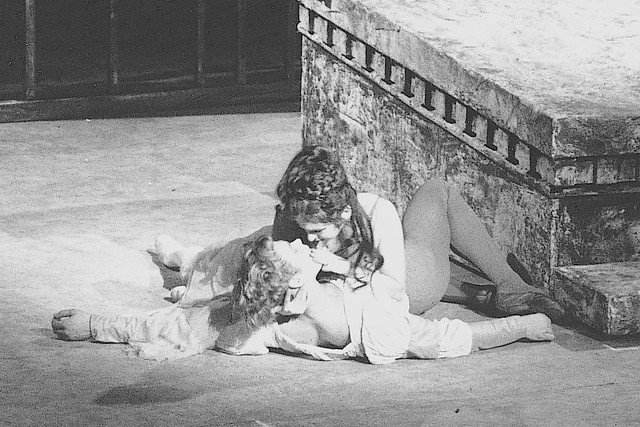 Working on the full ballet, MacMillan, Seymour and Gable read and reread the play and listened over and again to the Bolshoi orchestra’s recording of Prokofiev’s score. There was no question in any of their minds that Christopher and Lynn were to be Romeo and Juliet: the balcony pas de deux already contained the germ of their ideas about how the characters would develop.

MacMillan, as was already his custom, choreographed the climactic pas de deux in each act before moving on to the ensemble scenes. Seymour and Gable contributed their suggestions as the production evolved, ringing up MacMillan in a fever of excitement at night and trying out fresh ideas at the next rehearsal.

In the midst of this creative ferment came the shock announcement that Fonteyn and Nureyev were to be the first-cast Juliet and Romeo, not Seymour and Gable. Sol Hurok, impresario for The Royal Ballet’s American tours, had insisted on the famous pair for the New York premiere. He needed the assurance that the publicity generated by their appearance in the ballet’s first performances in London would guarantee American ticket sales.

Hurok won the day. Advance publicity in November 1964 informed the ticket-buying public that Fonteyn and Nureyev would dance the first two performances in London, and two more later in the run. Tickets would be rationed to two per person because of the expected demand and prices would be higher for their performances than for other casts. Seymour and Gable were due to make their debuts (as the fourth cast) at the fifth performance. They were aghast. MacMillan, in deep distress, had protested in vain.

Seymour and Gable were obliged to teach ‘their’ roles to Fonteyn and Nureyev, as they arrived from guest appearances elsewhere. Up until the last moment, it looked as though the injured Nureyev might be replaced by Gable as Fonteyn’s Romeo. In the event, Nureyev danced with Fonteyn at the premiere, on 9 February 1965, taking 43 curtain calls during applause that lasted for more than forty minutes.

Seymour and Gable became the second cast. They were rapturously reviewed but still took second place on the American tour, where Fonteyn and Nureyev were acclaimed as the original cast.

This is an edited extract from Jann Parry’s article 'Creating a Classic’ in The Royal Ballet’s programme book, available during performances and from the ROH Shop.

Romeo and Juliet runs until 2 December 2015. Tickets are still available.

The production is supported by Boodles and is staged with generous philanthropic support from Peter Lloyd, Lindsay and Sarah Tomlinson and the Jean Sainsbury Royal Opera House Fund.