By Genevieve LeBaron (Writer and scholar) 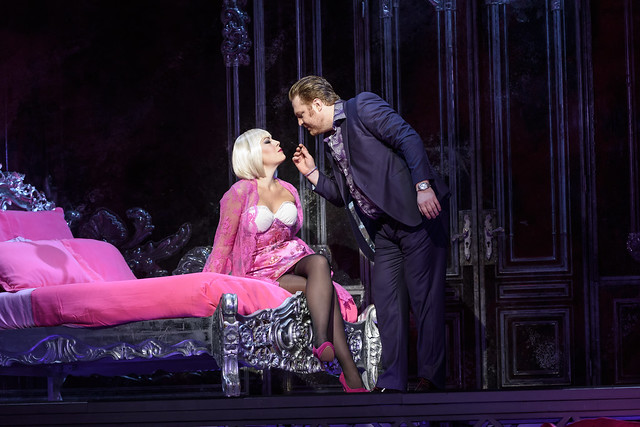 Puccini’s opera Manon Lescaut is based on the 18th-century novel by French writer Abbé Prévost. Both works tell the story of a young woman forced to make a choice: life with her lover, Des Grieux, but suffered under the burden of poverty; or a life where, in exchange for her body, wealthy men will keep her in luxury. It’s a story just as relevant now as it was in Puccini’s time.

Jonathan Kent’s Royal Opera production is not intended as a realistic depiction of modern slavery – and yet Kent and designer Paul Brown draw clear parallels between Manon’s life as Puccini tells it, and the experience of contemporary victims of modern slavery around the world today. Three in particular stand out:

The first is that – like many victims of contemporary slavery – Manon is not kidnapped or captured by her exploiter by physical violence, but rather, chooses a life of exploitation to escape poverty. With no qualifications or alternative ways to secure a livelihood, Manon feels she has little choice but to accept a degrading life with the elderly Geronte. This is a reality for the more than 21 million victims of forced labour today, whose vulnerability to exploitation is driven primarily by poverty. Lacking access to decent work, millions of people today are forced to accept dangerous, degrading or high-risk jobs. These are often in industries in which forced labour is known to thrive, such as fishing, mining, garments, gold or agriculture, or in the sex, hotel and hospitality industries. Businesses or individuals looking to profit from modern slavery deliberately seek out the vulnerable and exploit them.

The second parallel lies in how money and psychological abuse are used to encage and disempower victims, and prevent them from leaving exploitative situations. In the opera, Manon feels unable to leave Geronte’s house due to psychological abuse and financial insecurity. In one powerful scene, Manon has an opportunity to escape but hesitates to leave without her jewellery – the keys to her freedom. While searching for her emeralds, she is caught by the guards and thrown in jail. Victims of modern slavery often face similar constraints on their freedom to exit. The threat of poverty and starvation keep them bound to their exploiter. Debt bondage, the under- or non-payment of wages and the retention of passports or identity papers is also used, as well as violence, threats of violence, emotional and psychological abuse. Like Manon, although these victims face exploitative, degrading and unsafe conditions, without the money they’d need to secure a better life, many are unable to exit.

The third parallel that stands out is the struggle for freedom, even amid bondage and exploitation. Until the moment of her death, Manon attempts to escape the constraints placed upon her freedom by poverty, Geronte, her family, the police and others. She strives to carve out intimacy, genuine connection and later a life with Des Grieux, though the toll taken on her by her harsh life means that she dies before she is able to realize this dream. By portraying Manon not as a helpless victim, but rather as a person who is making choices about her best options for improving her life – and who struggles to maintain connection and love in the face of bondage – the opera captures perfectly the reality of millions in the contemporary global economy, who continue to carve out lives and livelihoods even as they face severe constraints on their freedom.

The production is a co-production with Shanghai Grand Theatre and is staged with generous philanthropic support from Mrs Susan A. Olde OBE and the Kiri Te Kanawa Foundation Cover Awards.

By Genevieve LeBaron (Writer and scholar)