This neuroscience-inspired pas de deux from Alastair Marriott’s acclaimed ballet powerfully evokes a sense of loss on a journey through life. 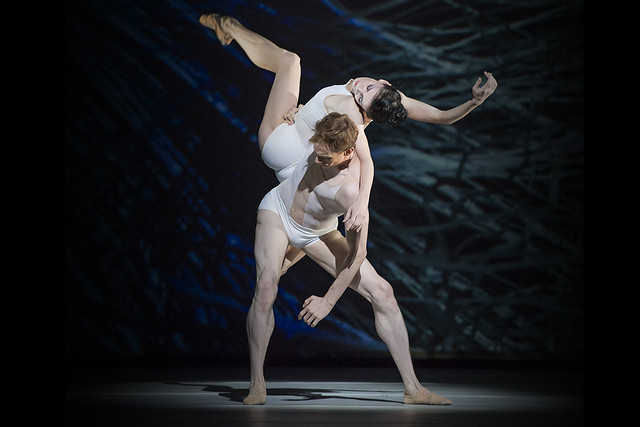 Ballet and science: apparently alien disciplines – but are they more closely linked than you might think? In recent years, reciprocal influences between the two fields have developed as scientists have researched the physics behind the art form, and choreographers have been inspired to create works based on scientific concepts and theories.

Connectome is Alastair Marriott’s first ballet to draw on science – specifically, neuroscience. His ballet in four movements, set to haunting music by Arvo Pärt, is influenced by the cutting-edge research of Dr Sebastian Seung. Seung’s theory of connectomes (maps of the connections in the brain) explores how neural wiring is formed, and attempts to determine the extent to which it shapes a person’s identity. The ballet’s designers, Es Devlin, Bruno Poet and Luke Halls, used imagery of connectomes as the basis for their dazzling set and video projections, against which Marriott’s choreography depicts the developing identities of a central female figure and two men whose paths cross with hers. He explains: ‘I mapped out certain emotional aspects of life – interactions with other people such as infatuation, spirituality, loss and finally chaos and order… you start and finish life alone but you change over time so you have a very complex connectome by the end’.

The ballet’s penultimate section, set to Pärt’s Silouan’s Song, is an intense, yearning pas de deux between the female protagonist and a male partner. At the beginning of the movement, a glittering, broken-up image of a connectome is projected onto hundreds of white poles that descend from above. These poles rise to reveal the man and woman lying on the ground, their limbs extended and feet touching, resembling the fused neural pathways pictured behind them. As the projection of the connectome revolves, the couple too begins to roll – feet still conjoined – before spinning round and then unfurling again, the woman arching her torso between the man’s outstretched legs.

The theme of contact and connection established in these opening seconds forms the basis of the pas de deux. The dancers stretch, cambré and lean through entangled, constantly moving partner-work that appears to mirror the imagery of the connectome – in which synapses are joined, detached and re-formed – while also suggesting the close relationship between the couple. At one particularly striking moment of connection, the woman folds back into the man’s body and he suspends her off the floor – not with his arms, which are stretched above his head, but by gripping her leg between his thighs. And a little later, he leans forwards and lifts her onto his back as she reaches an arm and a leg skywards and then draws them back, quivering, charged with emotion.

Towards the end of the duet, this involved, magnetic union seems to break down. The man looks distracted, beginning to wander off, and the woman’s movements are increasingly despondent. When the pair come together, they grasp onto one another with a hint of desperation – especially on her part. Pärt’s score builds to an agonized climax as the man whirls the woman round wildly once, then again, and she kicks out. As it dissipates, a strange calm is resumed. He cradles her, slowly spinning, and she encircles him lovingly with her arms – but suddenly the man melts to the floor, falling backwards. The woman’s arms remain curved in front of her, reaching out for her partner. As the connectome behind them fades into blackness, it seems she has lost him.

The Royal Ballet performs Connectome as part of a mixed programme with Raven Girl 6–24 October 2015. Tickets are still available.

The production is staged with generous philanthropic support from the Connoisseurs’ Series.