In the first of a series of articles on how composers rework operas, we explore changes to Don Carlo and Simon Boccanegra. 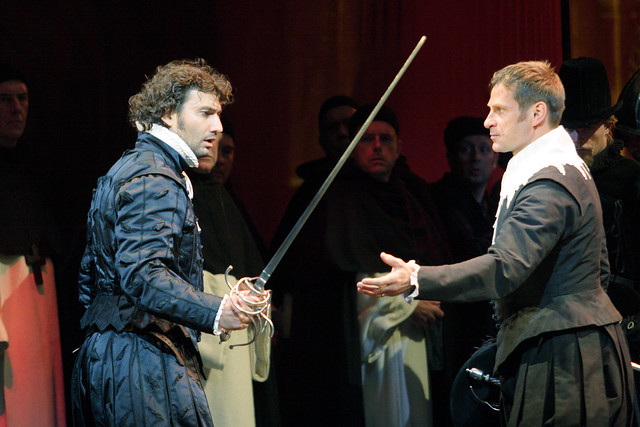 Opera composers rarely see the first performance of a work as the end of a job. Several great composers have been notorious ‘revisers’. When Mozart brought Don Giovanni to Vienna a few months after its Prague premiere, he rewrote sections to suit his new cast. Wagner revised Der fliegende Holländer at least three times, and Tannhäuser twice (he was planning further revisions shortly before he died). Strauss completely rewrote Ariadne auf Naxos after its unsuccessful premiere in 1916.

Giuseppe Verdi, whose bicentenary we celebrate this year, often revised his operas after their world premieres. Five of his operas underwent particularly extensive changes: we will look at Macbeth, Stiffelio and La forza del destino in a future article, but here is the background to two operas from this season, Don Carlo and Simon Boccanegra:

Don Carlos/Don Carlo is the opera that Verdi revised most extensively. He wrote it for the Paris Opéra, as a work to equal the grand operas of Meyerbeer (such as the hugely popular Robert le diable). It featured a dramatic historical subject, spectacular tableaux, grand choruses, an elaborate ballet, a dramatic burning of heretics and starring roles for six principal singers. Even in rehearsals, it became obvious that the opera was too long (a prime concern was audience members missing their last train home - not much has changed!), and several extensive cuts were made.

Verdi had an Italian translation made of the original French Don Carlos libretto in 1866, and various productions of the opera, given in Italian as Don Carlo, took place in Italy 1868–71. During this period Verdi continued to revise the score, making his most dramatic cuts for Milan in 1884. He cut scenes from both Act III and Act V, and disposed of the first act altogether, so that the now four-act opera opened with Elizabeth married to Philip, and Carlos grieving at the tomb of his grandfather. To ensure that Carlos still got an aria, Verdi reworked his ‘Io la vidi’ (‘Je l’ai vue’) from the original Act I, turning it from an expression of love to one of nostalgia.

The ‘Milan’ version of Don Carlo has survived and is still often performed. However, it was not Verdi’s last word on the subject. Unhappy at having cut the act that showed Carlos and Elizabeth falling in love, Verdi produced a final, five-act version of the opera for Modena in 1886. This reinstated Act I in a shortened form, but kept most of the other cuts made for Milan.

Simon Boccanegra is the most important example of Verdi revising a work to improve it musically and dramatically. The premiere of the first version of Simon Boccanegra in 1857 was a failure. One critic loyally described the opera as ‘one of Maestro Verdi’s most beautiful compositions’, but it soon fell into neglect.

More than twenty years after the world premiere of Simon Boccanegra, Verdi met the brilliant librettist and composer Arrigo Boito. Verdi had considered revising Simon Boccanegra for years. He decided to test the possibility of working regularly with Boito by recruiting him to help revise the opera for a production at La Scala, Milan. Boito’s main task was to substantially rework Act I, which Verdi found undramatic. Boito agreed, writing to Verdi: ‘the drama we are working on is lopsided like a table that wobbles… there is much intrigue but not much structure’. He added that the opera ‘lacks tragic power as much as it lacks theatricality’.

So Boito and Verdi completely rewrote Act I scene 2 of the opera. The scene was moved from the harbour at Genoa to the Doge’s Council Chamber, and now opened with the Doge urging his senators to make peace with Venice. The new scene also included a fight, a large-scale ensemble in which Boccanegra calms the crowd, and a chilling final chorus, in which Boccanegra pronounces a curse on Amelia’s abductor. This extensive revision made Boccanegra seem a far more impressive and noble character, and provided a thrilling end to Act I.

Verdi and Boito’s other revisions further enhanced Boccanegra’s dramatic power. They included a duet in which Fiesco blesses Adorno’s engagement to Amelia, revisions to Boccanegra and Amelia’s great Act I duet to make both parts more characterful and a chilling recitative for Paolo in Act II as he plans to poison Boccanegra. Verdi also retouched various scenes, adding a greater harmonic and instrumental richness to the music.

The premiere of the revised Boccanegra was a great success. It took some time for the opera to establish itself in the repertory, but the 1881 version is now widely regarded as one of Verdi’s most compelling creations. The Royal Opera have staged the 1881 version of Simon Boccanegra to acclaim three times in the last ten years, in two different productions. The opera was last seen here in 2010 in Elijah Moshinsky’s production, with Plácido Domingo in the title role (recorded for EMI) and will return here in June 2013.

Don Carlo runs from 4 - 25 May while Simon Boccanegra runs from 27 June - 16 July. Tickets are still available.