Guess how many pointe shoes The Company use in a week, and share via social media for a chance to win. 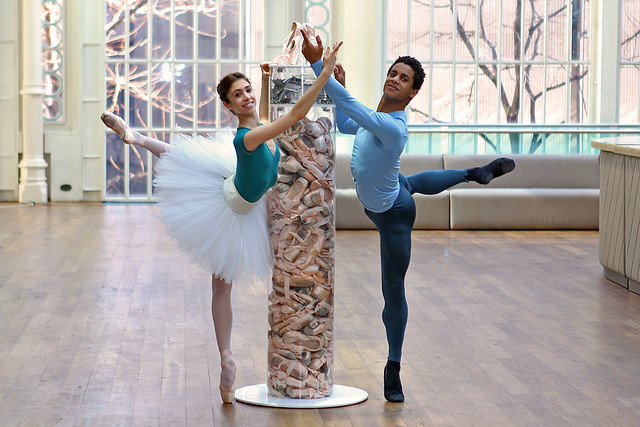 Yasmine Naghdi and Marcelino Sambé with our Pointe Shoe Tower - showing the number of pointe shoes used by The Royal Ballet in a week © ROH/Ruairi Watson, 2014

UPDATED 22/04/14: THIS COMPETITION IS NOW CLOSED. The answer was 330 shoes (115 pairs) and the winner was Ioan Stefanovici.Thanks for all your entries!

With this year's Pointe Shoe Appeal open, we're offering a chance to win a pair of tickets to a Royal Ballet in Rehearsal event on 24 April 2014, part of our ROH Insights series.

To highlight the campaign, we've collected the pointe shoes that the Company get through in a week. These are on display in a box in the foyer by the ROH Box Office and are taller than each of the dancers who are fronting this year's appeal - Francesca Hayward, Marcelino Sambé and Yasmine Naghdi!

As well as winning tickets to the rehearsal event, the competition winner and their guest will receive a backstage tour and tea and cake.

To enter the competition, tell us how many shoes you think are in the box and share a picture of it on Twitter or Instagram, using the tag #PointesWinPrizes. If you're not on social media, you can have a guess in person and post it into the pointe shoe tower.

The deadline for entries will be 21 April 2014. The winner will be selected at random from all correct entries received.

Those who additionally make a donation to the Pointe Shoe Appeal online will also be entered into a draw to win a pair of pointe shoes signed by Francesca Hayward.

Terms and conditions of entry:
The prize is a pair of tickets to see a Royal Ballet in Rehearsal Insights Event on 24 April 2014 at 7.30pm. The prize is as stated and there is no cash alternative nor is it transferable. All entries must be received by 21 April and the winner will be selected at random from all correct entries received. The Royal Opera House’s decision is final in all matters. Tickets on the 24 April are subject to availability and winning tickets must be claimed by 23 April.

This article has 34 comments