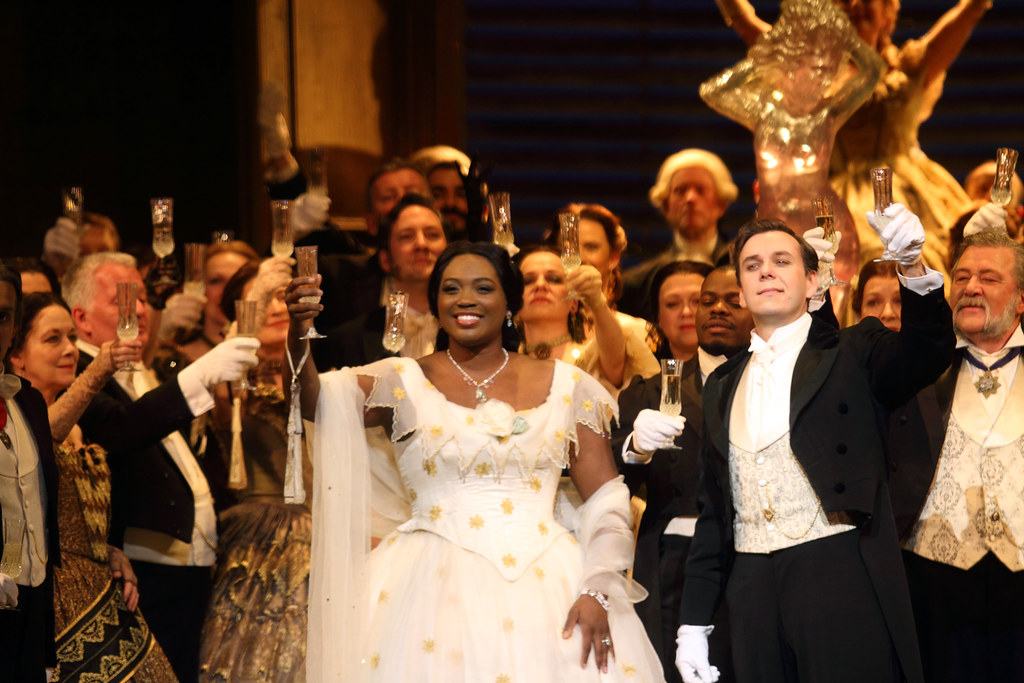 Celebrating 75 years of the Royal Opera

Rupert Christiansen charts the legacy, impact and vision of The Royal Opera Company as we celebrate 75 years on stage in Covent Garden.

It’s three quarters of a century since the Royal Opera House opened its doors post-war – and a good half century since I became a regular visitor, first as a teenager in the Amphitheatre, latterly as a privileged critic in the Stalls. What a journey!

I could wax lyrical about my vivid memories of those early years of discovery – the sheer vocal magnificence of Sutherland and Pavarotti, Jon Vickers’s mesmerising intensity in Peter Grimes, Kiri Te Kanawa’s debut in Le nozze di Figaro, the Midland Bank Proms when us poor students finally got to sit downstairs (albeit on the floor) – and I dare say that highlights of last autumn’s season such as the enthralling Jenůfa and Freddie De Tommaso’s sensational Cavaradossi will be remembered 50 years hence. But this is a moment to consider broader issues.

It’s strange to think that the enterprise was still called Covent Garden Opera when I started out – the honorific of The Royal Opera was granted only in 1968. And there have been bigger changes than that: the controversial arrival of surtitles in the 1980s, for one thing, transforming the whole debate about opera in English, and the ongoing differences of opinion over the ‘authentic’ interpretation of baroque and classical music.

Perhaps the fiercest disputes however, have revolved around questions of production. In the 1960s, the heat was on the stagings by Franco Zeffirelli – adored by some for their beauty and atmosphere and detested by others as needlessly extravagant and cumbersome, entailing prolonged intervals to change the massive sets. Latterly it’s been the Germanic school that has split audiences into two camps – does a deconstructive approach illuminate or desecrate? Does it make sense to respect a composer’s original intentions? are we paying to be shocked or entertained? The battle rages on.

What is less obvious on the surface is the evolution of the public’s musical taste and the slow changes in the mainstream of the repertory. In the 1960s, for instance, Britten was still widely considered far-out screechy-scratchy and box-office poison, but the most recent productions of Billy Budd and Death in Venice, universally acclaimed, were absolute sell- outs; George Benjamin’s new operas have also proved astonishingly popular. Mozart is now such a core feature of our operatic life that it’s hard to appreciate that it was only in the mid 1970s that La Clemenza di Tito and Idomeneo reached Covent Garden, and aside from three performances by the visiting Vienna Staatsoper in 1947, even Così fan tutte didn’t make it until 1968.

Slavic opera has made notable progress: Eugene Onegin is as beloved as Carmen or La bohème today, but it was entirely absent from the Royal Opera House between 1906 and 1971, while Rusalka had to wait until 2003 for so much as a concert performance. Although Jenůfa was first performed in 1956, other Janáček works weren’t performed until the 1990s – The Cunning Little Vixen arrived in 1990, Katya Kabanova in 1994 and From the House of the Dead in 2018. It would be interesting to research whether certain operas (Il Trovatore? Gluck?) have lost favour to make way or whether the canon has simply opened out and expanded.

What I think we can say is that audiences have become more ready to give novelties an unprejudiced hearing and that certain barriers that previously separated high and low culture have come crashing down. Serialism, ‘ethnic’ idioms, electronically processed sound, jazz, countertenors, the minimalist and maximalist – all these are now not only accepted but appreciated alongside the ‘traditional’ symphony orchestra and operatically trained voices working within classical tonality.

Also striking is the way that the company has become so much more flexible and geared to working outside the main auditorium. First came the ground-breaking education and outreach programme, taking opera to schools and communities in areas of deprivation (notably through the wonderful facilities offered by the ROH’s High House Production Park in Thurrock). Then came the Linbury, which permitted The Royal Opera to embark on a variety of more intimate, experimental and chamber work - a place where boundaries could be tested, and risks taken away from the configuration of the proscenium arch and the horseshoe auditorium.

Finally, and perhaps most significantly, has been the impact of the new technologies in how we make and interact with opera. The stuff of science fiction in 1946: from videos and DVDs to HD satellite broadcasts into cinemas and to home computers that has been such a godsend during the pandemic. As the ROH emerged from Covid closure in May 2021, The Royal Opera presented Current, Rising - the world's first hyper reality opera, blending artistic excellence and cutting-edge technology. The 15-minute multisensory experience put the audience at the centre of the performance and in doing so offered a brand-new perspective on what opera can be.

On the other hand, what one might call lock, stock and barrel touring has dwindled almost to nothing: it has simply become too impossibly expensive. There have been occasional visits to Asia, but within the UK, the last time that the full chorus and orchestra left London for a staged performance was in 1998, when Don Carlos was taken to the Edinburgh Festival. But this has to be considered in the context of the new operatic ecology that has developed since the 1950s in which the regions are served by Scottish Opera, Welsh National Opera, Opera North, Glyndebourne Touring Opera and English Touring Opera.

What of the future? The Royal Opera’s Director of Opera Oliver Mears is optimistic. The pandemic has put enormous financial strains on the organization and necessitated rigorous economies, but Mears is determined that this will not result in the lowering of artistic standards or ambitions. ‘The easy way out would be to pull up the drawbridge and stop employing foreign singers or cut the number of new productions. We aren’t going to do that. Instead we will be scrutinising every aspect of design with a view to both saving money and making ourselves more green.’

The challenges are immense, but Mears finds a silver lining in the pandemic: ‘The wild enthusiasm we’ve been seeing in audiences returning to the house is so heartening. It’s brought home to me how much opera is valued: the experience of losing it for a while means that we will never take it for granted again.’