Verdi's classic opera will be relayed live to cinemas around the world. 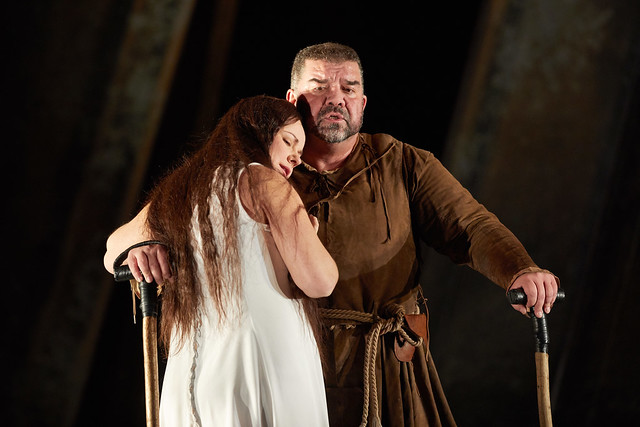 The Royal Opera's production of Verdi's classic Rigoletto will be relayed live to cinemas around the world on 16 January 2018.

Featuring some of opera’s most memorable tunes and a cinematic plot of revenge, Rigoletto is one of the most popular works in the repertory today. So proud was its composer of his creation, that he thought it was one of his finest works.

To enhance your viewing experience, access our Rigoletto Digital Programme for free using the promo code FREERIGOLETTO, and enjoy a range of specially selected films, articles, pictures and features to bring you closer to the production.

Set in a Renaissance court ruled by a debauched Duke, Rigoletto tells the story of a vengeful court jester and his daughter, the only person he cares about.

Rigoletto’s master, the Duke of Mantua, is a notorious womanizer. When Rigoletto makes fun of a Count whose daughter has been seduced by the Duke, the Count curses Rigoletto. The curse begins to take effect as Rigoletto’s own daughter, Gilda falls in love with the Duke. Though Rigoletto is harsh and bitter at court – where his cutting put-downs have made him many enemies – he loves Gilda to obsession. When he finds out that she has become one of the Duke’s victims, he plots a desperate revenge.

Rigoletto features some of Verdi's finest music, including the famous aria ‘La donna è mobile’, a catchy, popular tune which has re-appeared many times in films and adverts. So sure was Verdi of the tune’s potential that, for fear of a premature leak, he forbade his cast from singing or whistling the tune in public before the premiere.

The opera also contains some wonderful moments for the orchestra. The short, ominous prelude sets up the opera’s dominating tone of foreboding, while Act III’s vivid evocation of a storm is reminiscent of Beethoven’s storm music in his ‘Pastoral’ Symphony.

David McVicar’s engrossing Royal Opera production of Rigoletto is unflinching in its depiction of the corruption at the heart of the court of Mantua. The lavishly-dressed Duke and courtiers happily engage in a brutal orgy in Act I. Rigoletto, dressed to suggest a cockroach, mocks the Duke’s victims and enemies, only to have them viciously turn on him in Act II. The indulgent life at court contrasts with the shabbiness of Rigoletto’s house, where little details such as potted flowers show Gilda’s efforts to make a home for herself and her father. In Act III the squalor of Sparafucile’s inn (a spectacular two-level set) shows the depths to which Rigoletto has fallen in his search for revenge.

The live cinema relay will star Greek baritone Dimitri Platanias as Rigoletto, with American tenor Michael Fabiano as the Duke of Mantua and English soprano Lucy Crowe as Gilda. Alexander Joel will conduct.

Read what opening night audiences thought of the opera

This article has been categorised Opera and tagged by David McVicar, cinema, Production, Rigoletto