Christopher Wheeldon's fantasy ballet will be relayed live to cinemas around the world as part of the Royal Opera House Live Cinema Season. 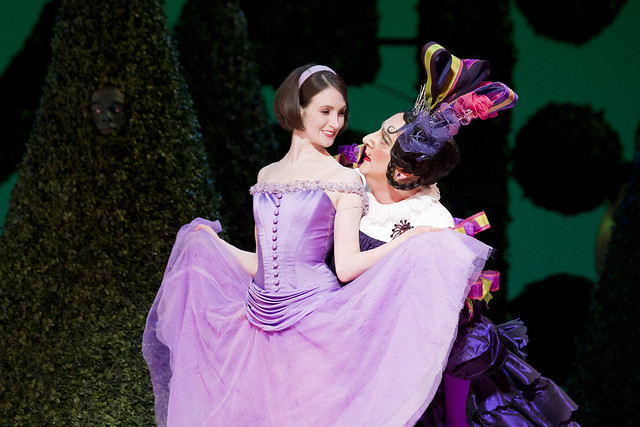 The Royal Ballet's modern classic Alice's Adventures in Wonderland will be relayed live to cinemas around the world on 23 October 2017.

Christopher Wheeldon's dance adaptation of Lewis Carroll's classic novel is a visual feast, featuring an explosion of colour, stage magic and inventive, sophisticated choreography. The ballet features many of the book's instantly recognizable characters, from the highly-strung Queen of Hearts, to a sinuous caterpillar and a tap-dancing Mad Hatter.

To enhance your viewing experience, access our Alice's Adventures in Wonderland Digital Programme for free using the promo code FREEALICE, and enjoy a range of specially selected films, articles, pictures and features to bring you closer to the production.

Lewis Carroll's iconic fantasy tells the story of a young girl who, following a mysterious white rabbit, journeys through Wonderland, encountering a host of weird and wonderful characters on her way. Along her way, Alice is swept off her feet by the dashing Knave of Hearts, but will he survive the tyranny of the axe-happy Queen of Hearts?

Wonderland comes to the stage through some of modern ballet's most eye-popping designs by Bob Crowley, which draw on everything from puppetry to projections to make Wonderland wonderfully real. Particularly memorable is Alice's descent into Wonderland, and the climactic scene set in the court of the Queen of Hearts, but Wheeldon's production does not avoid the darker undercurrents of Lewis Carroll’s story: a nightmarish kitchen, an eerily disembodied Cheshire Cat and the unhinged tea party are all here in vivid detail.

The choreography and music

Christopher Wheeldon's choreography is grounded in classical ballet technique, but other styles are also drawn upon too, including tap and hip-hop. Its stylistic diversity was a major part of the ballet's immediate acclaim with audiences at its premiere in 2011 and is mirrored in regular collaborator Joby Talbot's expansive and equally diverse score.

'One of the reasons I chose Alice in Wonderland is because I wanted to take the characters from the book and make them come to life', says Wheeldon. 'They're very physical, even on the page - they already suggest characters with movement'

The live cinema relay will see Lauren Cuthbertson dance the role of Alice, reprising her role from the premiere six years ago. The cast will also feature Federico Bonelli as Jack/The Knave of Hearts, James Hay as Lewis Carroll/The Rabbit and Laura Morera as the Queen of Hearts. Steven McRae will dance the role of the Mad Hatter, a role created on him. Koen Kessels will conduct.

We've rounded-up audience and press reviews from opening night and we'd love to hear from you before, during intervals and after the live cinema relay, so share your thoughts via Twitter and Instagram using #ROHalice.

Alice's Adventures in Wonderland will be relayed live to cinemas around the world on 23 October 2017. Find your nearest cinema and sign up to our mailing list.

It is a co-production with The National Ballet of Canada, is supported by Boodles and is staged with generous philanthropic support from Kenneth and Susan Green, Doug and Ceri King and The Royal Opera House Endowment Fund.

This article has been categorised Ballet and tagged Alice's Adventures in Wonderland, by Christopher Wheeldon, cinema, movies, Production