Butterfly’s sanctuary: The long history of Madama Butterfly at the Royal Opera House

From the opera’s UK premiere in 1905 through to the present day, Puccini’s much-loved opera has a long and close relationship with Covent Garden. 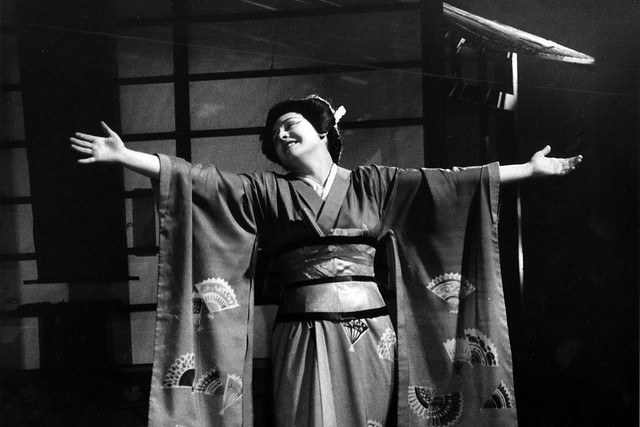 Madama Butterfly was first performed at Covent Garden on 10 July 1905, just 17 months after its world premiere at La Scala, Milan. With a cast including Emmy Destinn, Enrico Caruso and Antonio Scotti its success was ensured and it became hugely popular, performed 155 times before World War II. Excluding this Season's performances, it has been seen 404 times on the Royal Opera House stage to date, and continues to be an audience favourite.

There have been three original productions at the Royal Opera House since the establishment of the theatre’s resident opera Company in 1946. The first was produced in 1950 by former ballet dancer Robert Helpmann for the Covent Garden Opera Company. It lasted through the Company’s renaming as The Royal Opera, until Nuria Espert directed a new production in 1988. The third was created in 2003 by Moshe Leiser and Patrice Caurier, and is still performed to this day.

ROH Collections holds a wide variety of archive material in different formats covering all three productions, as well as items from the opera’s UK premiere at the Royal Opera House in 1905. At this time, the Royal Opera House had an in-house designer, Attilio Comelli, whose collection of approximately 1,500 watercolour costume designs includes several for the Butterfly premiere.

Sophie Fedorovitch’s 1950 designs for the Helpmann production, and Ezio Frigerio’s from 1988, are also held by ROH Collections, while the Costume Collection includes many of the original costumes and accessories designed by Fedorovitch (1950) and Franca Squarciapino (1988), out of its more than 6,000 items. Each design captures the differing styles of the production and of the individual designer.

Playbills and posters have been used to advertise what’s on at Covent Garden since the first theatre opened in 1732, and along with the collection of programmes provide a hugely important record as to what has been performed on the main stage over nearly 300 years. ROH Collections includes a programme for the first performance of Madama Butterfly in 1905, and posters from performances in 1914 and 1959, among other items.

Since 1948 stage managers’ reports have been produced after every performance, listing, among other things, any issues that have occurred. From these we know that the first night of the 1950 production on 17 January went without a hitch; but the second performance on 25 January suffered from technical difficulties. We use the programmes and the stage and house managers’ reports to complete entries in our Performance Database, a searchable resource that is currently being updated and which will eventually list every performance on the main stage since 1946.

Programme for the first performance of Madama Butterfly by the Grand Opera Syndicate, 10 July 1905 © ROH Collections

ROH Collections look after approximately one million images of performances, performers and the Royal Opera House. Contained within the collections of photographers Roger Wood and Donald Southern are many photographs documenting Madama Butterfly at Covent Garden.

All these resources vividly re-create the atmosphere of previous productions and provide a valuable insight into the design choices over decades of changing theatre practice. For this reason samples of the material from ROH Collections was used in the Royal Opera House’s interactive digital guide around Design Challenge, helping students to develop skills and knowledge in marketing, production and design.

Charles Craig as Lieutenant F.B. Pinkerton and Sena Jurinac as Cio-Cio-San in the 1959 revival of Madama Butterfly (1950) © ROH Collections

ROH Collections contains a wealth of material recording the history of the three theatres that have stood on the Covent Garden site since 1732, and the performances that they have housed.

The production will be broadcast live to cinemas around the world on 30 April 2017. Find your nearest cinema.
The production is a co-production with Gran Teatre del Liceu, Barcelona, and is staged with generous philanthropic support from Mrs Susan A. Olde OBE, Aud Jebsen, Spindrift Al Swaidi and The Maestro's Circle.