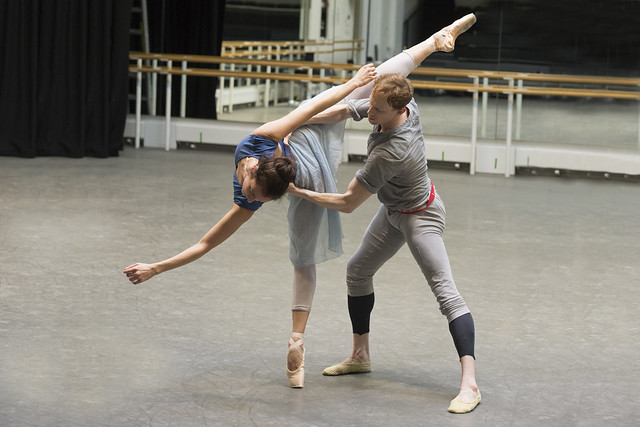 Christina Arestis and Edward Watson in rehearsal for Ceremony of Innocence, The Royal Ballet © ROH/Bill Cooper, 2014

Britten and ballet? You might think it's not an obvious pairing, certainly not as obvious as Britten and opera. The Suffolk-born composer wrote only one full-length ballet, The Prince of the Pagodas – a towering achievement, but strikingly solitary. Of the other ballets he was commissioned to write there's just Divertimento, adapted from Rossini's Soirées musicales for George Balanchine and the American Ballet Company's 1941 tour of South America and not danced since; and an elusive orchestration of Chopin for American Ballet Theatre's Les Sylphides, which has a question mark hovering over whether it has ever been performed.

But look closer and there's a lot more to it than that. Throughout his life Britten was fascinated by what may be best termed as 'functional' music – 'I want my music to be of use to people', he said – and dance, of course, was a key part of that. In his operas he drew on the social purposes of dance almost as much as he drew on folk music: we see dance music used to give a sense of community in Peter Grimes, of ceremony in Gloriana, of rambunctious jollity in A Midsummer Night's Dream.

In his final opera, Death in Venice, dance becomes as much a part of the fabric of the work as singing. The beautiful young Tadzio, innocent object of ageing writer Aschenbach's impossible adoration, is cast as a dancer. His muteness and distant power, so clearly at a remove from the sung world of Aschenbach, come to represent not only in the essential futility of the older man's love, but also – in Aschenbach's fevered mind – the incarnation of physical freedom against the ordered rigidity of his own existence.

As dance influenced Britten, so his music has influenced a wide band of choreographers. Kim Brandstrup and Christopher Wheeldon are just two of many choreographers who have returned to Britten’s music throughout their careers, and both used his music in the works soon to be staged by The Royal Ballet as part of a mixed programme alongside Liam Scarlett's The Age of Anxiety.

Brandstrup first worked with Britten's music in 1992, choreographing Death in Venice for Graham Vick's Royal Opera production. ‘Its elegiac tone has undoubtedly coloured the way I listen to all of his music', he says. Brandstrup finds this colouring in the relatively early work Variations on a Theme of Frank Bridge, which he has used for Ceremony of Innocence, created for the 2013 Aldeburgh Festival. ‘It demonstrates the lightness of touch and the ease of a brilliant young composer who had been a child prodigy, a boy wonder – yet at the centre of Variations is a Funeral March and the final music, at least to my ears, seems to have the same weight and tone as the end of Death in Venice.’

Wheeldon too has had a long affinity with Britten, after dancing with The Royal Ballet for Kenneth MacMillan's production of The Prince of the Pagodas in 1989. 'Since then I’ve choreographed Variations on a Theme of Frank Bridge and also the Diversions for Piano (left hand) and Orchestra – twice'. In his Olivier Award-winning Aeternum he uses Britten's Sinfonia da Requiem, which Britten described in a letter as 'Combining my ideas on war & a memorial for Mum & Pop'. For Wheeldon, 'The music weaves in and out from the sombre repetitive churching of the “Lacrymosa” to this crazy, devilish second movement and then finally to the very beautiful, light-filled, off-to-a-better-place third movement' – a structure clearly reflected in Wheeldon's choreography.

Great choreographers before Brandstrup and Wheeldon have also been drawn to Britten’s music. John Cranko created the choreography for the original productions of Gloriana and The Prince of the Pagodas. Frederick Ashton choreographed the premiere of Death in Venice; his three one-act ballets to Britten include the fascinating Les Illuminations for New York City Ballet, an intriguing setting of Britten’s Rimbaud song cycle that includes a pierrot who dances with one foot bare and the other on pointe. MacMillan’s Britten works include Winter’s Eve (created for his then-mistress Nora Kaye), a version of Soirées musicales and Gloriana dances (which shocked Ashton with choreography that has Queen Elizabeth I flung about with MacMillan’s customary flair for daring lifts). And today choreographers such as David Bintley, Alastair Marriott and Liam Scarlett continue to find inspiration in his music.

What are your favourite Britten ballets?