British comedy Song for Marion released in the UK

The film focuses on a community choir and stars a host of British acting talent. 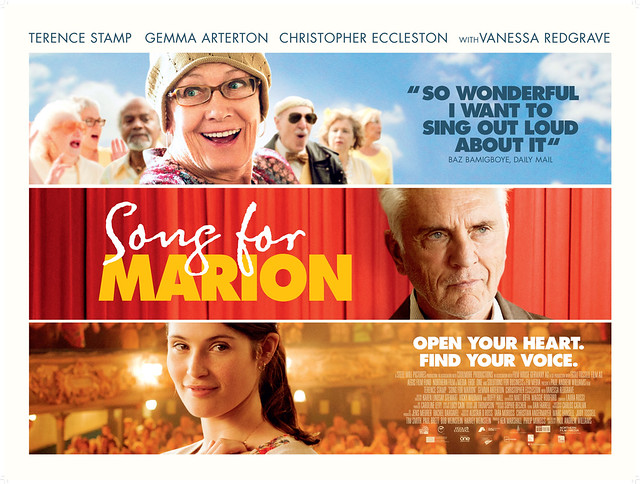 Song for Marion, starring Vanessa Redgrave and Terence Stamp, can be seen in UK cinemas from today.

Written and directed by Paul Andrew Williams, the film follows Marion (Redgrave), who is terminally ill but loves singing for a local chorus, and her husband, Arthur (Terence Stamp), who grumpily disapproves. When tragedy strikes, Arthur has to revise his ideas about the choir.

Only a handful of the choir members in the film were professional actors. They were picked from a community chorus in Newcastle, where the film was shot.

Watch the trailer of Song for Marion here:

Arthur’s skepticism about the choir is mirrored by the gender imbalance in many singing groups around the country. Our community choir, the Royal Opera House Thurrock Community Chorus, had a drive for new male members in January, and the number of men taking part has doubled since then.

‘I have been singing for 50 years but had never considered myself to be a “serious” singer so it was with some trepidation that I joined the ROH Thurrock Community Chorus in January 2012. I need not have worried. At our collective best, we sound amazing - it's our passion and commitment that allow that to happen. So bring it on for 2013!’

Find out more about our ROH Thurrock Community Chorus here:

The ROH Thurrock Community Chorus will be performing live on 29 and 30 June as part of FUSED Thurrock Choral Festival. During this event, there will be workshops and performances and the chance to find out more about the choir. For information about tickets, contact getinvolved@roh.org.uk

Education charity Damaris has created a number of resources to encourage people to think about personal, everyday life issues raised in Song for Marion.

Are you a member of a choir? Let us know what the experience has been like for you.