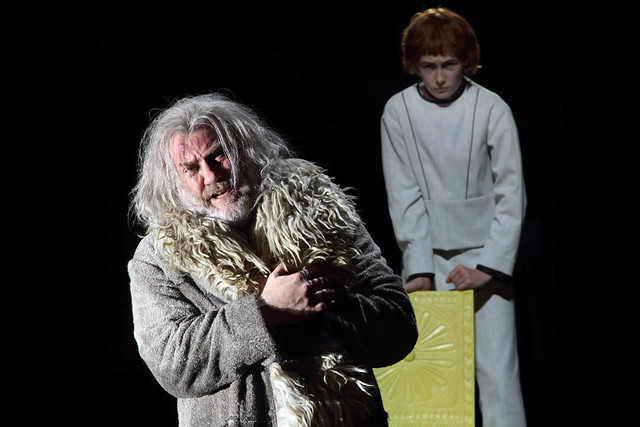 Richard Jones’ new Royal Opera production of Boris Godunov will be broadcast live to cinemas around the world at 7.15pm GMT on 21 March 2016.

Download the Boris Godunov Digital Programme for free using the promo code FREEBORIS and enjoy a range of specially selected films, articles, pictures and features to bring you closer to the production.

The cinema relay will be presented by TV and radio broadcaster Katie Derham.

Based on the play of the same name by Alexander Pushkin, Boris Godunov is inspired by the true story of the Russian Tsar who ruled the country at the end of the 16th century. The line between fact and fiction has become blurred over the centuries and is the subject of much debate by historians

Read our article about the mystery of the real Boris Godunov

In Musorgsky's version of the tale, Boris comes to power by supposedly murdering the true heir, the nine-year-old Tsarevich Dmitry. He rules Russia well, but his people suspect that the series of famines that have swept through the Kingdom are divine punishment.

This conspiracy leads to an uprising against Boris and a young monk Grigory decides to pose as the risen Dmitry in a bid to seize the throne.

Please note: We advise that this production is not suitable for children under the age of 12.

Ain Anger as Pimen and members of the Royal Opera Chorus in rehearsal for Boris Godunov, The Royal Opera © 2016 ROH. Photograph by Catherine Ashmore

Nicholas Sales as Boyar and Bryn Terfel as Boris Godunov in rehearsal for Boris Godunov, The Royal Opera © 2016 ROH. Photograph by Catherine Ashmore

Rebecca de Pont Davies as Hostess of the Inn and John Tomlinson as Varlaam in rehearsal for Boris Godunov, The Royal Opera © 2016 ROH. Photograph by Catherine Ashmore

Harry Nicoll as Missail and John Tomlinson as Varlaam in rehearsal for Boris Godunov, The Royal Opera © 2016 ROH. Photograph by Catherine Ashmore

Russian composer Modest Musorgsky developed a new way of composing for the Russian language that achieved great lyric beauty. Beset by personal tragedy, Boris Godunov was the only opera the composer completed and is regarded as his masterpiece.

The music is a work of conflict, emphasizing the tensions between a ruler and his people, and a ruler's public action and internal thought.

The Coronation Scene is one of the opera's most powerful and famous musical moments. In it, Musorgsky establishes the conflicts that drive the opera.

Read our Musical Highlight article, which explores what makes the Coronation Scene so powerful

After the relay on 21 March, we will publish a roundup of the audience tweets, so share your thoughts using the hashtag #ROHboris.